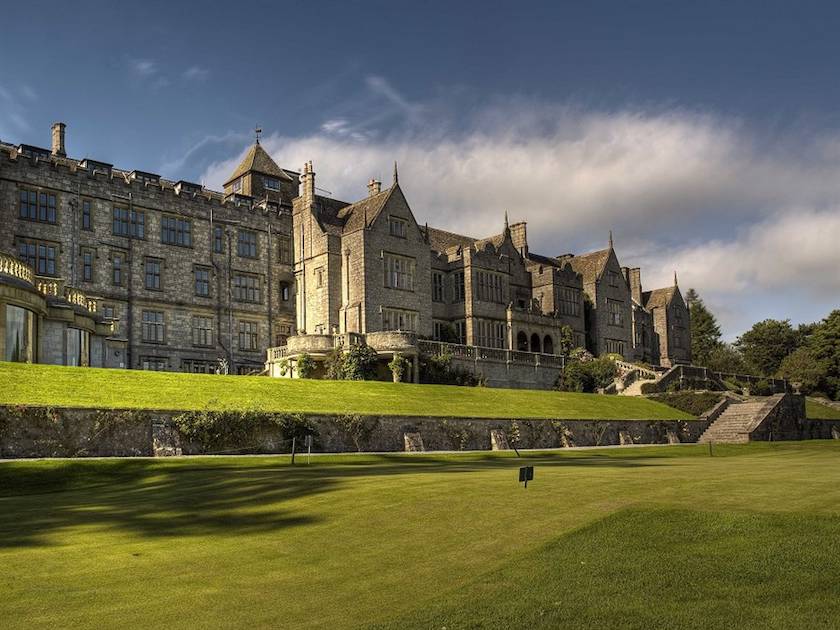 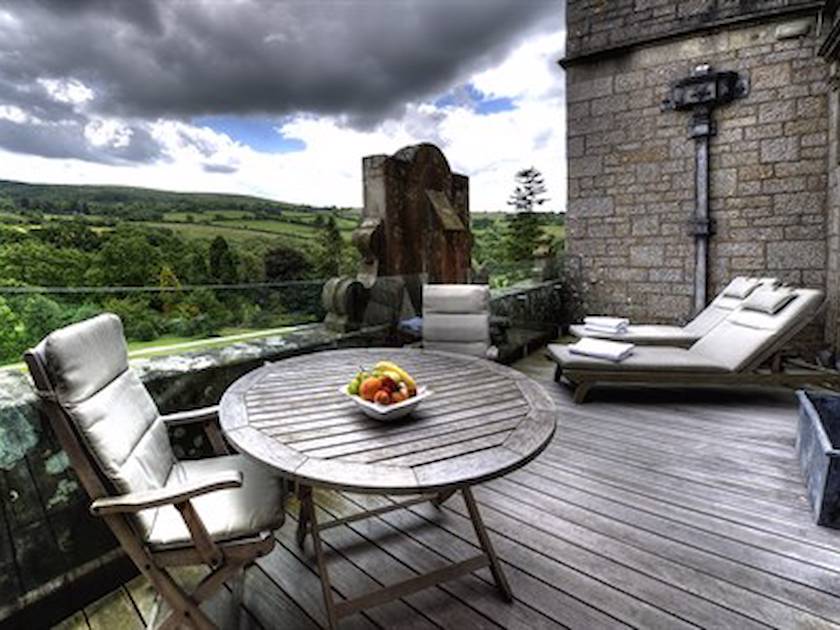 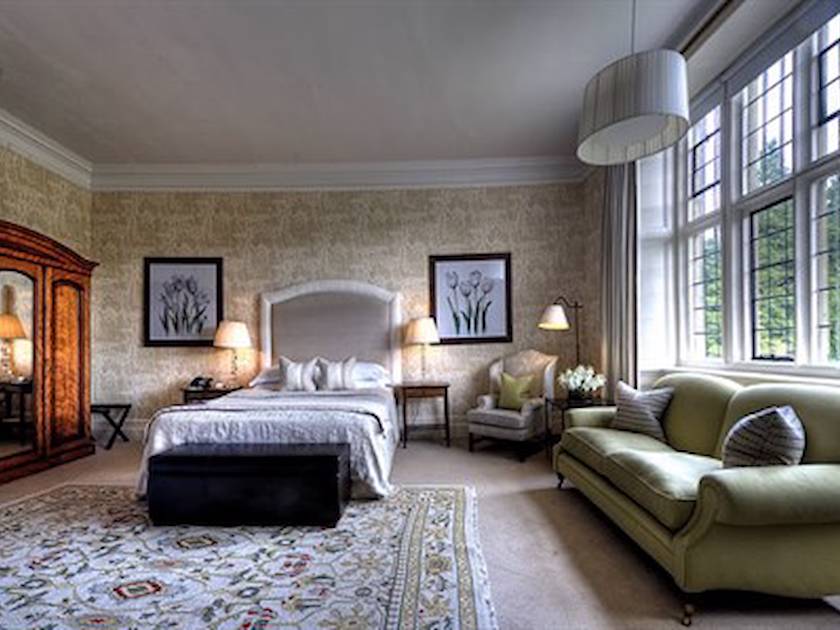 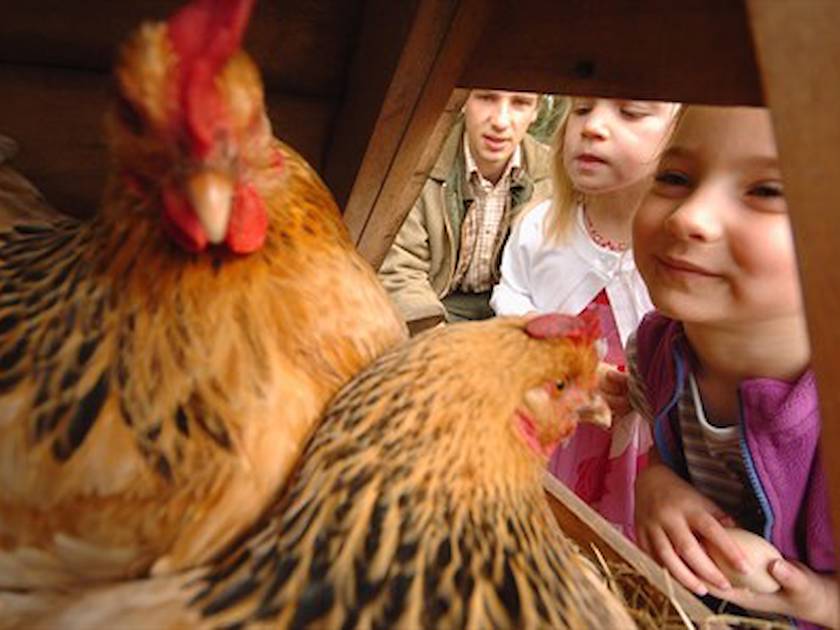 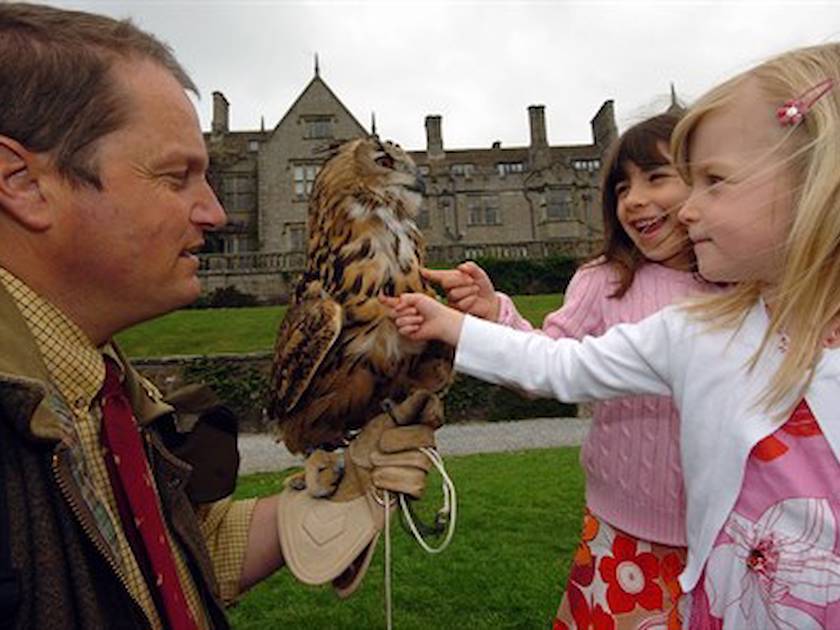 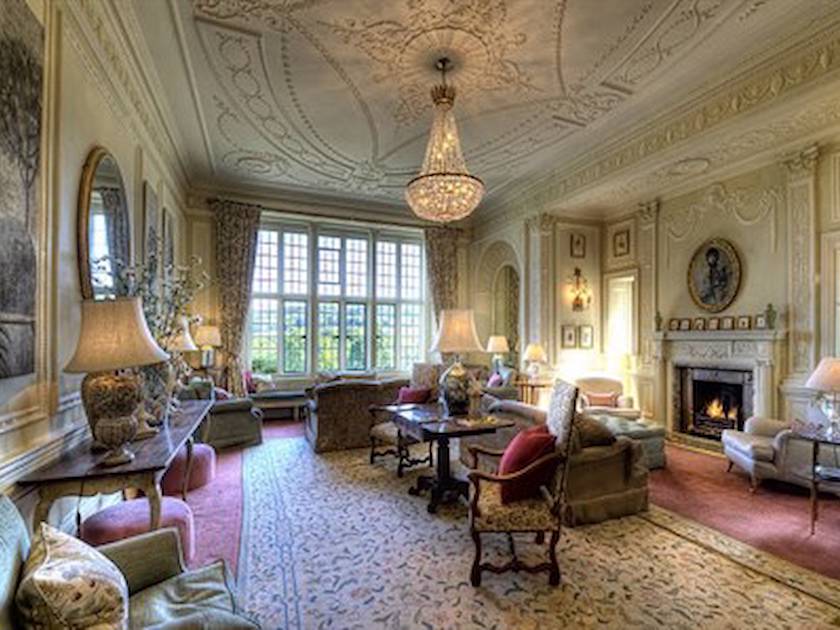 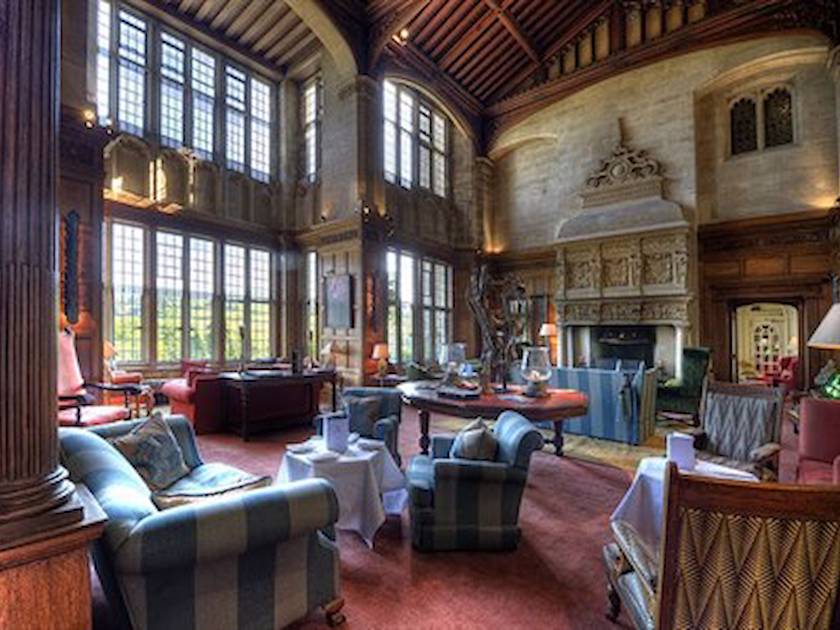 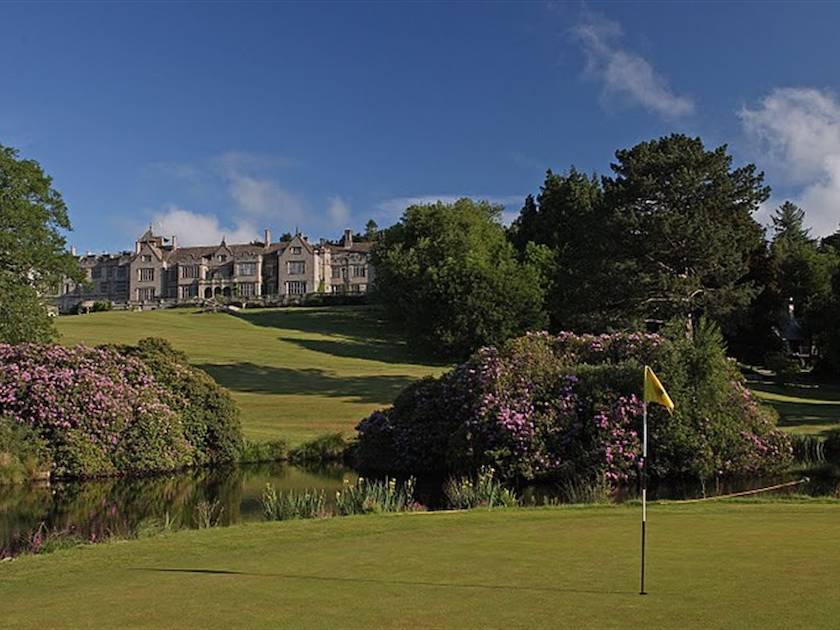 Deep in the hills of Dartmoor National Park lies Bovey Castle, a remarkable hotel where you are treated like royalty yet in a most welcoming and relaxed atmosphere. No stuffiness here, so just put your feet up and let the kids run wild. And then there is golf - of course.

Let's face it, most of us would like at least one holiday with the family where we don't feel guilty as we sneak off to the golf course and leave them to fend for themselves. Your wife's stern look and the pleas from the children: "Daddy, don't go!     This is something that I did not experience as I headed out of our hotel room and off to play golf at Bovey Castle. Not because I'm a heartless beast, no, the feeling of peace is due to the fact that Bovey Castle is a place that has something for everyone. While I am off thrashing my way around the golf course, the kids are busy taking part in some of the many activities arranged for children here by the Bovey Rangers team, and my wife is off for some spa treatment.

Lead astray. We arrive here on a wet afternoon, and the first bit of advice that I want to offer, is don't trust your sat nav! Dartmoor seems to be a Bermuda Triangle. So when your sat nav proudly states that you have arrived at your destination, and you look out at the sheep grazing in the empty field where you're parked, don't say I didn't warn you.    After ditching the rather suspect navigation device and finding some very helpful locals to give us directions, we were soon back on the right track. Within a few minutes, we turned into the long, stately drive that leads to Bovey Castle, and the sun came out to greet us.    As with everywhere this summer, the rain has been the only constant part of the weather, and golfers appear from the shelter of trees and bushes as we head towards the hotel, blinking in the bright sunlight like creatures awakening from a long and dark hibernation. We pull up at the main entrance and are immediately welcomed by courteous staff in what seems to be early 1900s uniforms, offering to take bags and park the car.

Relaxed grandeur. The main hall is very grand with doors leading off into stately rooms with high ceilings and large fireplaces. The hotel exudes a feeling of grandeur, but in a very relaxed way. There are children heading outside to play now that the sun is shining and I can see that our two are already showing signs that they could go feral here, only turning up for food, sleep and the occasional ice-cream.    We are given a tour of the castle by Craig Loveday who is a member of the resort desk team, and also leader of Bovey Rangers which organises and runs children's activities at the hotel. He informs us that the 400 acres of land, deep in the Dartmoor National Park, was purchased in 1880 by William Henry Smith, (he of WH Smith fame), who later became Viscount Hambleden.

War and peace. Bovey Castle, which was originally called the Manor House, was built by his son Fredrick in 1907. The property became a convalescent home during the First World War and then a military hospital when war broke out again in 1939. From 1946 to 1983 it was again owned by the Great Western Railway, as before the war, and re-opened as a hotel. It then changed owners again in 1991 when considerable expansion took place and the golf course became a top priority. The Manor House became Bovey Castle in 2003 and has continued to expand with the addition of 22 lodges, spa and a swimming pool. The 18-hole championship course was designed in 1926 by the legendary JF Abercromby and was easily accessible due to the arrival of The Great Western Railway.    We check into our opulent room, with wonderful views over the golf course and on to the moors beyond. I change and prepare for my round of golf while the kids raid the mini bar for juice and any other treats that they can discover.

Tee off. I meet up with Richard Lewis, the Golf Professional at the clubhouse for a quick chat. An Essex man originally, I ask him how he ended up at Bovey. "The Golf manager here, who I had previously worked for in Essex, phoned me up and offered me the job. I thought OK, I can try Devon for a couple of years, and here I am 26 years later"!    By the time I prepare to tee off, the clouds have all but vanished and dare I say, it looks as if I am going to have a warm and sunny afternoon of golf.    The first hole is a par-4 down into a valley. The green is off to the left with a river protecting it. My aversion to water forces me to aim to the right and my ball narrowly escapes disappearing into the rough on the side of the hill. From there I manage a shot to the near side of the river, best play safe I think! I traverse the river and land my ball on the green. "Good start" I tell myself. Play safe and no heroics, knowing full well that it's impossible for me to keep to my own advice.

Beware of the buggy. The third is a par-3, down a narrow green that is hemmed in by a hill to the left and trees and river to the right. The green is on a peninsular with the river snaking around in front. One of the ground staff has parked a buggy to the left of the green, about half way down, and I am nervous that either someone will appear as soon as I take my shot, or that I will hit the buggy. "Don't be silly" I tell myself. Out of all the space in front of me, what would be the chances of hitting the buggy! My shot flies off low to the ground as I top the ball and smacks into the back of the buggy with a thud! Perhaps I should consider placing hazards exactly in front of the holes as I always manage to hit them! I'm relieved to find that (a) Nobody was there to see my awful shot, and (b). There was no damage to the buggy. I move on as quickly as possible.    The first eight holes, including the legendary 7th, follow the meandering river which comes into play on all of them at some point. After the 9th, a lovely par-3, you find yourself climbing up out of the valley. The 16th and 17th holes I find particularly pleasing, the former going uphill with bunkers and rocks in play and a fairway that tilts from left to right. The latter heads back down the hill again with a blind shot over the brow of the hill. You have to wait for the bell to be rung before you tee off unless you want to risk hospitalising any players in front.

Wild kids. I finish my round and return to the Hotel to find my wife resting on the veranda. As I suspected, the kids have now gone wild and are somewhere on the grounds building a campsite, or constructing traps to ensnare any lost golfers.    That evening we choose to eat at the relaxed and family friendly Castle Bistro, rather than the more formal Edwardian Grill where diners perhaps don't take so kindly to semi-wild children. The food is excellent and the Bistro staff courteous and attentive. Afterwards we find some comfortable chairs in front of one of the many open fires, while the children go off and attempt to teach the hotel parrot some new words.    The next morning we head down for breakfast in the very grand Edwardian room where you can choose hot food from the menu or a selection from the buffet. The kids order pancakes and talk excitedly about The Owl Experience, booked for later that morning. The atmosphere is relaxed and I have to say that it is one of the most pleasant breakfasts that I have had in a hotel for a long time.

The eagle has landed. On our way to the room to prepare for the day's events, we are surprised to find a man standing in the hall with a fully grown American eagle on his arm. A steadily expanding group of intrigued guests are standing around, some taking pictures, but all keeping a safe distance. The man with the eagle explains some facts about the bird and states that this particular one is not his favourite as she has quite a temper.

They come in all sizes. The kids are eager to see the owls and so we head off. When we arrive, we notice that a large metal box has been placed in a corner of the room and strange screeches and scraping noises seemed to emanate from inside.    Natalie Bettesworth, who is our owl expert, starts by taking out a small Southern White Faced Owl which originates from Africa. The children take it in turns to stand at various points in the room wearing a heavy glove. The owl then flies to each child and lands on their arm, coming in low over the other children.    After a few minutes Natalie puts the owl back in the cage and produces a slightly larger species. This continues until she brings out what is probably the largest owl I have ever seen, a Siberian Eagle Owl, which quite honestly could give the American eagle a run for its money. This owl stares around at the gathered children who in turn stare back with awe. Obviously being too heavy for the children, an adult is brought forward to hold this magnificent creature. The children leave the owl experience after not only having had a good time, but also having gained an insight into these wonderful birds and with a great story to tell their friends.   We were sad to leave Bovey castle and could easily have stayed for much longer. This is a place where whatever you are looking for, be it a quiet weekend or a holiday with the family, you'll find it here.

The M4 from London, the M6 from the North West and the M1/M42 from the North East all link up with the M5, which will bring you south to Devon and the West country.