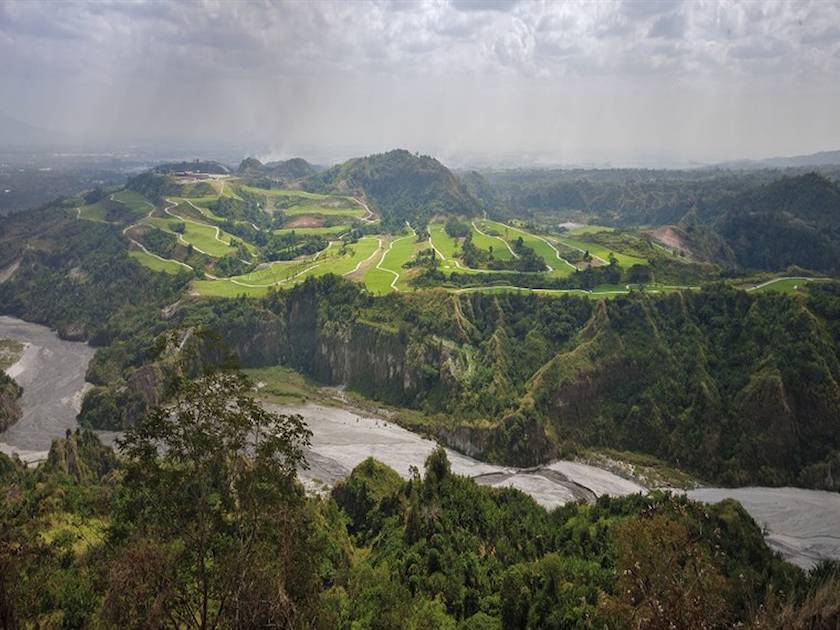 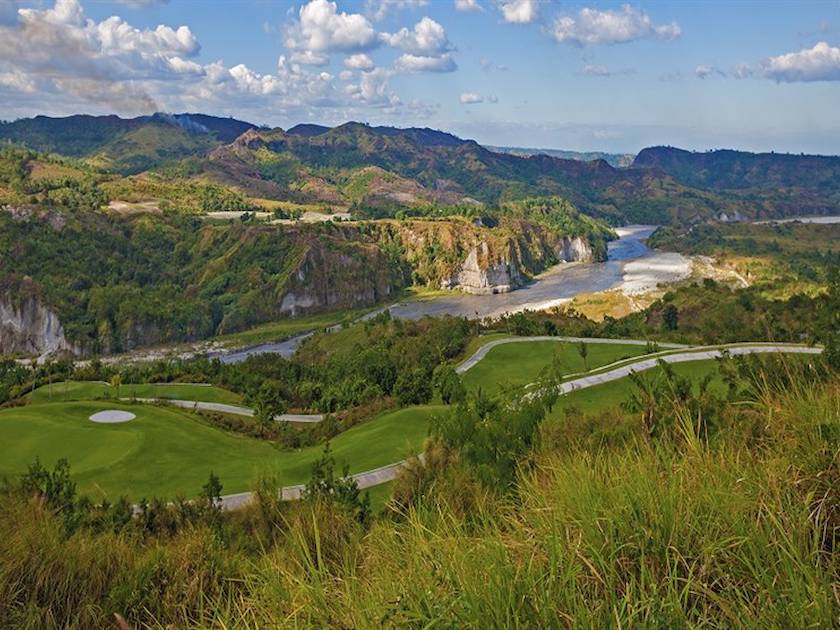 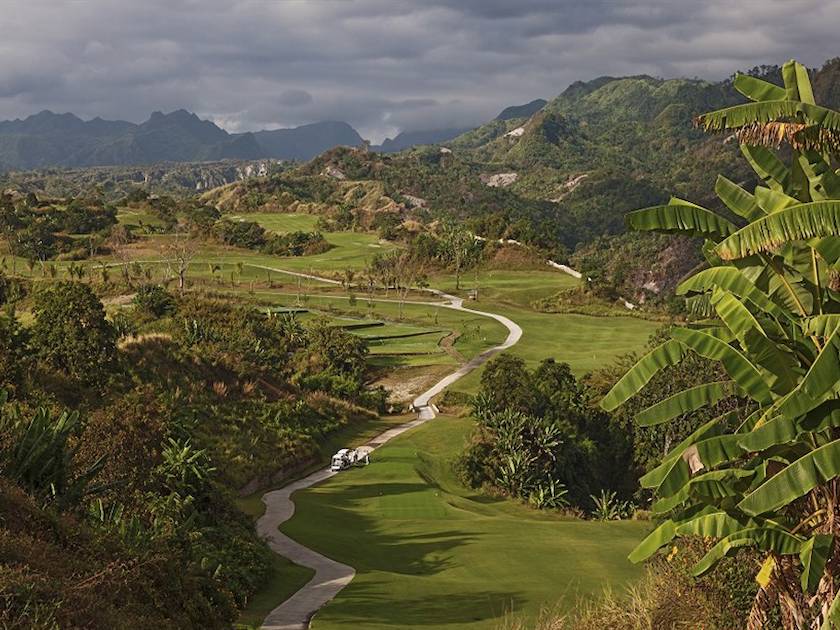 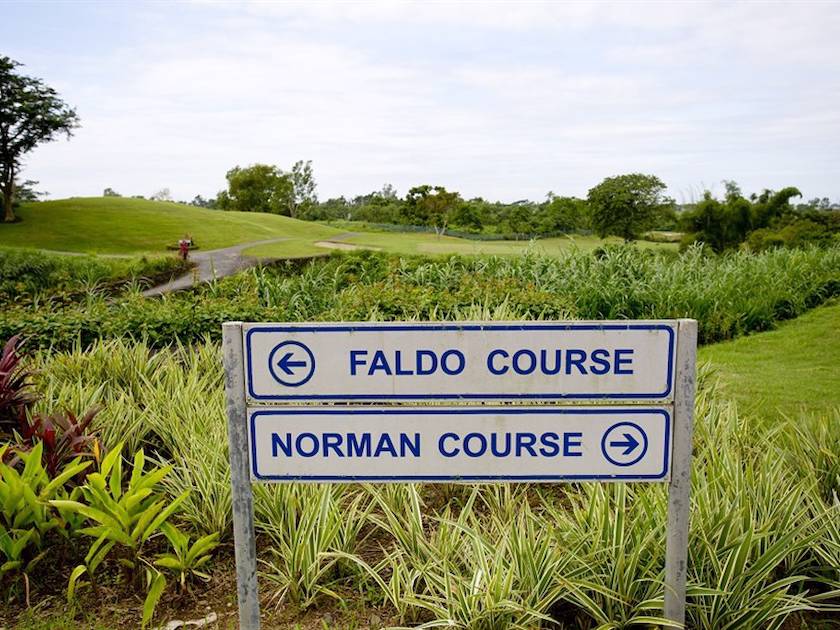 Perhaps not on the top of your list of golfing countries, the Philippines is still for many an exciting destination. So my friends and I decided to escape the craziness of Thailand’s Songran Festival for a new adventure...

This was my first trip to the Philippines, which meant a new stamp in the passport (yay!). We flew to Manila to check out the city plus the golf in the capital, before heading up to Clark and Angeles City, around two hour’s drive north of the capital.     From December to May, the climate is generally dry, but it can get dense and humid during the summer months from March to May, when average temperatures reach as high as 35°c. Avoid the months of July to November as they can be drenching wet due to the serial typhoons. We went after Easter in mid April and the weather was fine.

IN GREAT SHAPE. Golf in this region is in pretty good shape, with many of the top names including the likes of Palmer, Faldo, Langer, Dye, Nicklaus and Robert Trent Jones weaving their magic here.         Many of the clubs, though, are private. However, by booking through several of the excellent local golf tour operators, it is possible to get through the door at most of them. Avoid the weekends though, when the courses can be busy and the prices are sky-high. Average rates are around 3,000 peso (around £43). Go midweek, however, and some clubs offer discounts after midday with rates reduced to 1,200 peso (around £17). Some public courses can be even lower.     It is worth noting that most of the best courses will mean a 45-90 minute journey from Manila, depending on the time of day.     We were recommended to play the following courses, all south of the city, including Eagle Ridge, Sherwood Hills, Summit Point, Canlubang, Orchard and Southwoods. As we were only in Manila for two days, we decided to drive 60 minutes to check out the Eagle Ridge Golf and Country Club, 50kms south of the city.

MASSIVE CLUB. This club is really huge, with not one but four championship courses, designed by Isao Aoki, Andy Dye, Nick Faldo and Greg Norman. This is apparently the largest golfing facility in the country and also has a 60-room hotel.     The Aoki Course was deliberately designed for the weekend golfer, with its wide, open fairways and negligible rough. In deference to its designer, the clubhouse has a sushi bar plus a Japanese-style bath and sauna.     Andy Dye’s course was laid out to take advantage of a spectacular natural canyon, and the entire 18 holes offer creativity and mental discipline.     Greg Norman’s course is to be enjoyed by all; he has created signature holes around planned landscaping, verdant thickets and water displays.     Nick Faldo’s 18 holes are, according to locals, the toughest in the country – with wide and tight driving holes, with bunkers in the most unwelcoming spots. The greens here will test both your approach and putting, as some slope radically away from the line of play. Visitor rates were published on their website at 3,000 peso (around £43) for weekdays or 4,000 peso (around £58) for weekends. Once you have added the green fee cart and caddie fee, 18 holes will cost you around 4,100 peso (£59) to play here during the weekdays.

CITY CENTRE GOLF. For combining golf while in the city, we also checked out two city-centre courses. Near the Marriott hotel, by the airport, was The Villamor Air Base Golf Club – a par-72 championship course playing at 7,000 yards in a fairly flat terrain surrounded by mature trees. This is a typical old-style course, but it is well priced and very close to the international airport.     Alternatively, if you are staying in Makati or Malate you could always try the Club Intramuros Golf Course. It is a short par 66 public course which meanders around the ancient walled city of Intramuros. One local golfer had told me it was not up to much, but when we checked it out it looked like a lot of fun for a quick game hacking around the historical monuments. They also have night golf here, but we did not check out the standard of floodlights.

MANILA BY DAY AND NIGHT. Manila is trying to construct a new skyway expressway from the airport into the city to speed up driving times. However at the moment traffic is hideous, especially during the week, so take extra time to get about.     Manila is one of the Philippine’s oldest cities, and glimpses of cultures past and present blend together to give you an experience which is sometimes gritty, sometimes pleasant, but unmistakably authentic. The city is split into three main areas; the business district called Makati, Malate for the bars and cool restaurants, and the quieter historical area, known as Intramuros.     Intramuros area is very old with a heavy Spanish influence. The city’s Catholic Cathedral is in the centre, along with the famous Manila Hotel and The Bayleaf Hotel, several parks and the Club Intamuros golf club. Most of the action, however, is in the Malate district with its own China town, funky clubs and restaurants plus a red light area. There’s a wide range of hotels available, from the bay-fronted Diamond Hotel, the Hyatt and Pan Pacific 5-star hotels to many boutique hotels.

FUN AND GOLF. Rather than stay in Manila for the full trip, we decided to take a two-hour drive up country to Angeles City, close to the Clark Airbase. Formerly the largest United States military facility outside the US, Clark Airbase was significantly affected by the pullout after Mount Pinatubo erupted back in 1991.     Today, Angeles and Clark form the hub for industry, aviation, tourism, entertainment and gaming in the Philippines. With this expansion there are several new golf clubs planned, along with established courses such as Mimosa Country Club, the FA Korea Country Club and the Royal Garden Golf Club. Many are within 15 minutes drive from Angeles, or you can drive 45 minutes north of the city to experience the Luisita Golf and Country Club, designed by Robert Trent Jones Senior (voted in the top 100 in the world by Golf Digest).     Our hotel manager hooked us up with a round at Mimosa with some local expats. Apparently, the original 18-hole course was popular with US air force officers until the volcanic eruption covered the course with ash.     By 2004 they cleaned it all up and opened 36 holes. Today there are many mature trees, lakes and bunkers, and it offers a good round of golf on a fairly flat track. We also played the FC Korea course which offered good value with a lot of elevations. However, without doubt the find of the trip (and definitely a future Golf Digest Top 100 course) was the newly opened Clark Sunvalley Country Club – 36 holes of top-class magic.

SPECTACULAR VIEWS. Perched on a mountaintop overlooking the airbase, the Korean owners have created two 18-hole championship courses. The Clark course for members at 7,127 yards and the public course called Sun and Valley at 7,015 yards.     The views were spectacular and the condition of the fairways and greens were immaculate. Even the four-seater golf carts needed automatic low gears to reach some of the elevated tee boxes.     Here they do accept walk-in golfers and when the public course is closed they allow you to play the members’ course.  Both were exceptional with a lot of wow factor and the rates were reasonable for a top-class offering – 2,000 peso (around £29) for green fees and 1,000 peso (around £14.50) for a two-seater golf cart. Either course is well worth the flight to the Philippines alone, and is definitely a heart-throbbing experience.

AFTER SUNSET. As well as great golf, Angeles is a fun place after sunset when the neon lights take over and many head for the go-go bars and restaurants. A smaller version of Pattaya’s nightlife, Angeles even has its own ‘Walking Street’ open late into the night. The girls here love to dance and you will often find up to 30 women line-dancing together!     You can also take a trek to see the volcano at Mount Pinatubo, head to a local casino or if lawn bowling is your bag, then check out Hidden Valley Sports Club.

Where to stay in Manila

If you are just passing through and want to avoid the traffic jams, best check out Resort World. This has three hotels right next to Manila’s Ninoy Aquino International Airport. Marriott is its 5-star offering, and close by is a massive shopping mall, a casino, theatre, cinema and restaurants galore. The hotel also offers complimentary shuttle buses to several of the city’s top attractions and there is an MRT station nearby. Villamor Golf Club is also just five minutes away.     If you want to hit the night spots then Malate is the best area with the Pan Pacific, Hyatt and Diamond Bayfront offering top-end accommodation.

Where to stay in Angeles City

Reasonably priced hotels are located near the centre of town, with rates from 2,000 to 4,000 peso (around £28-£58) a night. We stayed at the boutique 4-star Queens Hotel, set in a great location in the heart of the action. They have a great new restaurant serving hot American steaks there and the staff were friendly and attentive. Good alternatives are the Penthouse Hotel or the Lewis Grand.

Manila’s traffic can be stressful with round-trips to golf courses taking up to three hours out of your day.

Also remember to leave plenty of time to reach the airport. It took us over two hours just to check in for our Philippine Airline flight back to Bangkok. Not a great ending to our vacation.

Angeles City meanwhile is a lot more laidback, with a better variety of courses at very competitive rates. We paid between 1,500-2,000 peso (around £22-£28) for green fees and they let you share golf carts.

The massive Clark Airport handles a number of flights from overseas, including Qatar Airways, Dragon Air and Air Asia. Next time I come, I think I’ll pass on Manila fly directly into Clark. 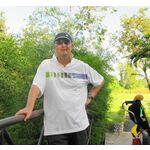