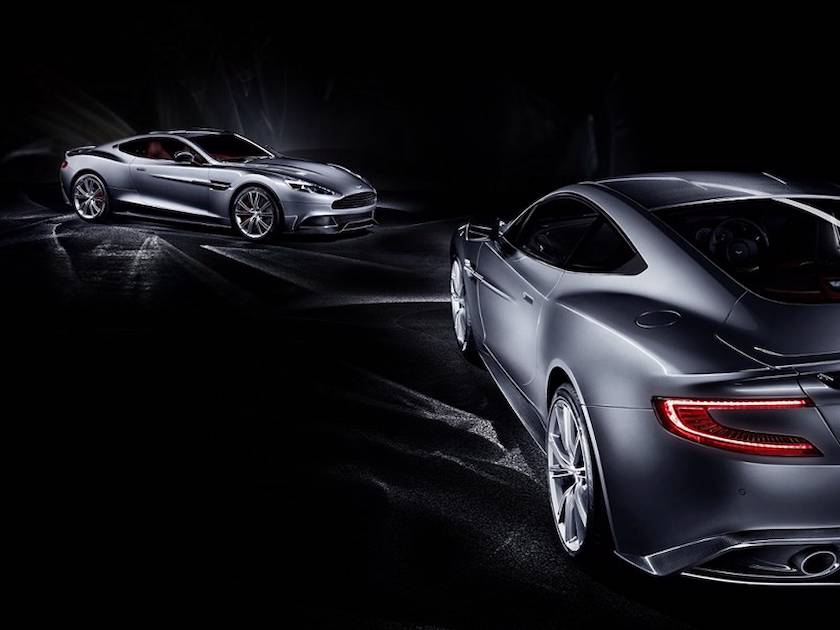 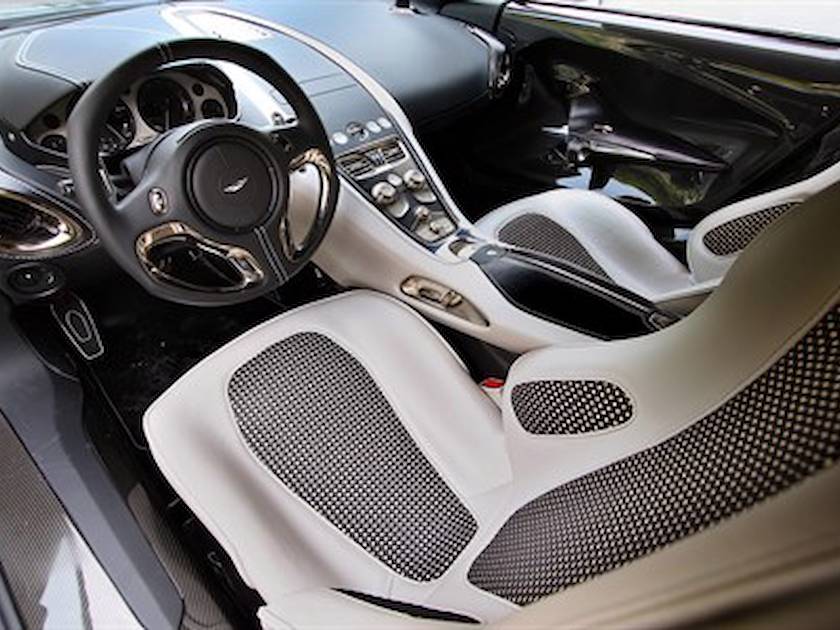 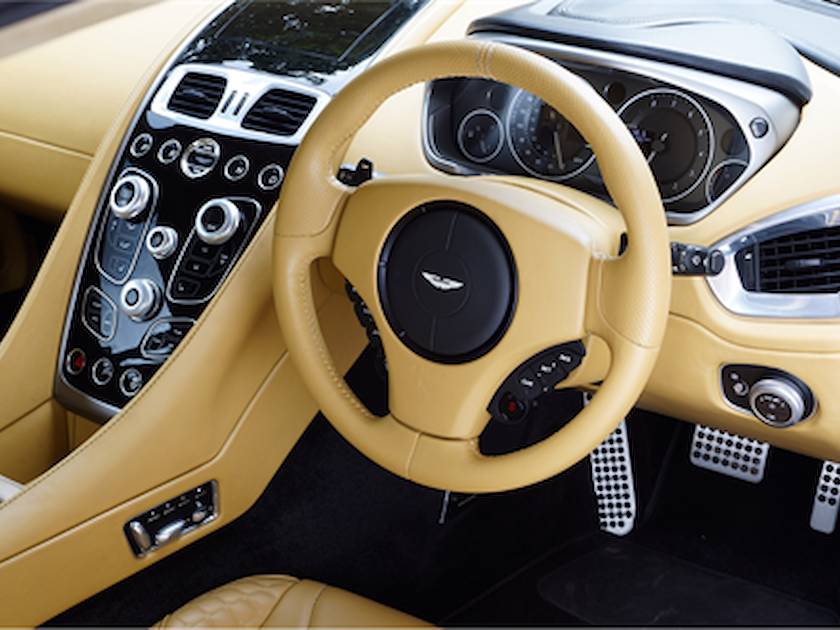 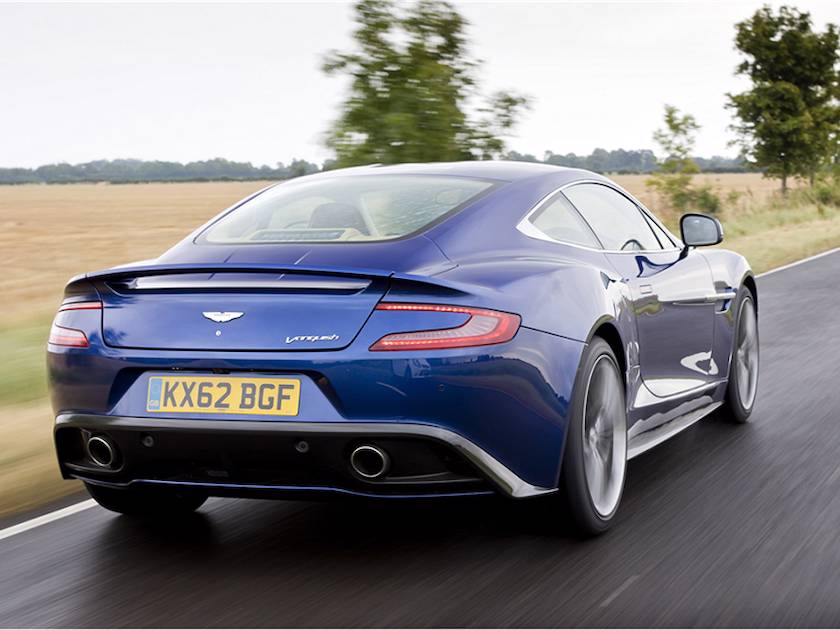 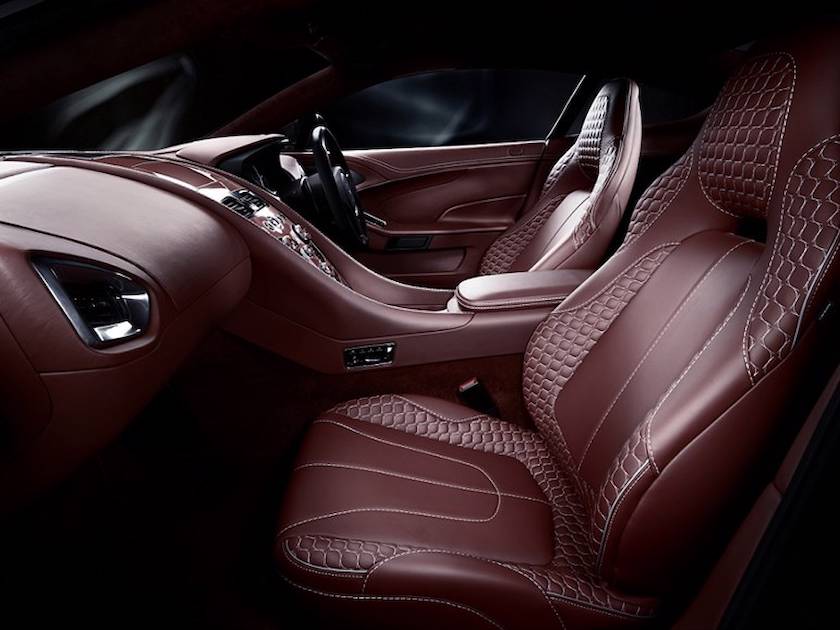 Sleek, sinuous and sexy, the Aston Martin Vanquish is a head-turner as soon as it hits the road. Angus Davies enjoys being the centre of attention as he takes this car out for a ride…

There is something very appealing about driving a gorgeous car and, quite simply, octane-fuelled transport does not come more gorgeous than the Aston Martin Vanquish. Each line of its sinuous body sensuously engages with ambient light, throwing shapes which beguile onlookers.     I recently had the opportunity to drive the Vanquish over a number of days on an array of roads, at differing speeds. Based on this experience, one aspect became abundantly clear, wherever this British motoring thoroughbred travelled it provoked admiring glances. The very sound of the baritone V12 led numerous heads to swivel around with amazing alacrity, their curiosity piqued by the rich timbre of the 5935cc engine.

BORN TO SEDUCE. Over the years, I have driven a plethora of prestigious cars, but nothing, absolutely nothing, has ever coquettishly charmed me like the Vanquish. The lithesome torso of this car features a myriad of swooping angles, judiciously positioned trim embellishments and perfect proportions. Every millimetre of the aluminium and carbon fibre body structure entices eyes to admire.    In 2012, shortly before this car was released for general sale, I visited Aston Martin’s HQ. There Marek Reichman, chief creative officer and design director of Aston Martin Lagonda, unveiled the Vanquish to unanimous applause. He explained each nuance of the design and left me aghast at the painstaking attention to detail manifest with every element of the Vanquish’s make-up.

RICH HISTORY. The eye-catching Vanquish is a piece of automotive art. It is the distilled creation of a company that knows much about producing incredible motorcars, always at the vanguard of design. Its origins trace back to January 1913, when Robert Bamford and Lionel Martin established a small workshop in Knightsbridge, London. The following year, after Martin succeeded in winning the Aston Hill Climb in Buckinghamshire, the company changed its nomenclature to Aston Martin.    With success came expansion and Aston Martin relocated to Feltham, London in 1947, before moving to Newport Pagnell, Buckinghamshire in 1955. The company was attracted to this latter location by the plethora of skills found within the town.    Aston Martin acquired Salmons Coachworks, a prodigious producer of coaches and carriages harking back to 1860. This company brimmed with talent. Time-served hands, accustomed to creating objects of peerless creation, proved wonderfully adept at working on Aston Martin models. Indeed, it was the talents of these local artisans who could adroitly work with an array of materials that would prove most useful in acceding to personal requests from the company’s well-healed clientele.

BESPOKE. In 2003, Aston Martin relocated to its present-day car production facilities in Gaydon, Warwickshire. Even with state-of-the art facilities, much emphasis is still placed on traditional expertise and craftsmanship. Potential purchasers are indulged with a breathtaking choice of options to tailor their new Aston Martin to personal and precise requirements.    Irrespective of whether your Aston Martin originates from Gaydon, or it is a restored ‘heritage’ model imbued with a new lease of life at Aston Martin Works in Newport Pagnell, a passion for progress has not seen the luxury marque eschew individuality.

OPTIONAL EXTRAS. I was reminded of this bespoke aspect as I appraised the numerous optional extras fitted to a gorgeous Midnight Blue Vanquish a few days before its arrival. I perused the lengthy specification sheet, detailing both the standard equipment and the numerous additional features. As a self-confessed ‘petrol-head’, I enjoyed this ritual – salivating at the very prospect of being entrusted to drive this automotive beauty for a few days and aching for the moment to arrive.    My press loan was generously equipped and fitted with several extras, hence the priced had climbed to £211,985. I took a friend and fellow motoring enthusiast for a drive and as ridiculous as it may sound, he remarked that the car represented incredible value for money. He was correct.    It is when you look at the overall blend of attributes of this supercar and its no-compromise composition that it appears to be a logical choice. Contrast the Vanquish with property and investments and you realise that few purchases costing £211K deliver anything like the same return on capital. No, I am not advocating the Vanquish as an investment, but consider for a moment the grin factor… when was the last time the return on your savings made you smile so unreservedly?

A TASTEFUL FUSION. The interior of my press loan was a tasteful fusion of texture and colour. The Full-Grain Luxmill leather upholstery was paired with vibrantly hued red Alcantara Headlining. The dashboard featured a Twill Carbon fascia trim (£1,495 extra), with contrasting shades of black and grey. What a car – and it’s relatively lithesome with a kerb weight of 1,739kg.

A PERFECT FIT. The problem with some sporty cars is that they are simply too confined to be comfortable, especially if you are tall. Indeed, many test drives have seen me contort my body into a painful state, employing part yoga and part corset-like compression. Thankfully, design director Reichman is a very tall chap; hence the Vanquish accommodated my sizeable frame with ease.

2+2 CHOICE. The interior of this car is the last word in luxury. All creature comforts are provided for the delectation of the driver and passenger(s). This car can be specified with a ‘2+2’ option for an additional £2,995. The press loan, KP15BYW, had the additional seats fitted, which may attract some would-be buyers who need to transport small children.    However, average-sized adults will find it challenging to enter the rear of the vehicle and sit comfortably for extended periods. I suspect those owners who have to transport more than one additional passenger may well have another vehicle to fulfill that role. Nevertheless, if you are ordinarily accustomed to driving solo or just with your ‘significant other’, take the keys to the Vanquish because nothing else compares.

JUST DRIVE. The key (or Electronic Control Unit) is unusual and looks like a prop from a James Bond movie. Placing the device into the dashboard-mounted aperture rewards the driver with a magnificent sense of theatre. Indeed, the key appears to be swallowed and shortly thereafter, bystanders are rewarded with the aural drama of the engine ferociously awakening before settling down to a civilised tick over.    Selecting gear is merely a matter of pressing a button on the dashboard, a highly intuitive system, which makes so much sense. Why can’t other cars be like this?    I recall Aston Martin models a few years ago and, whilst appreciating their attributes, I was disappointed to recognise the switchgear from a Ford family saloon. The British company has come along way since that time and every aspect of the car oozes quality. The ergonomics are superb, with the fit and finish of each control delivering a welcome solidity.

RELAXED FEELING. Driving the Vanquish along urban roads at sensible revs rewarded my restraint with incredible civility and a cosseting ride. When I chose to take the car onto the motorway and cruised at legal speeds, I found the experience incredibly relaxed.              There was a welcome absence of jarring suspension, often found with other high performance cars, and there was absolutely no need to shout over the engine. I appreciated the progressive action of the accelerator, with no trigger-happy whiplash resulting from careful heal and toe action.    Conversely, the Vanquish plays very hard when required. Press the throttle and it will lift its hem and run to the hills with breathtaking alacrity. Steering wheel mounted controls allow the driver to firm up the ride and hold the car in gear for longer.

SUBLIME COMFORT. This brings me to the raison d’etre of the Vanquish. It was conceived to devour autobahns with consummate ease; pampering occupants with sublime ride comfort. Yet, on the other hand it proved that it could engage enthusiastically with S-bends with scalpel-like precision, rewarding the driver with a profusion of pleasure.    Yes, I enjoyed the reaction of the public who smiled at the Aston not with envy or disdain, but with a friendly wave and well meant thumbs up. I don’t know whether this reaction was due to patriotism for a British masterpiece or merely recognition of excellence in their midst, but the same reaction was witnessed time and time again. Drive the Aston Martin Vanquish and you feel like you are king of the hill.