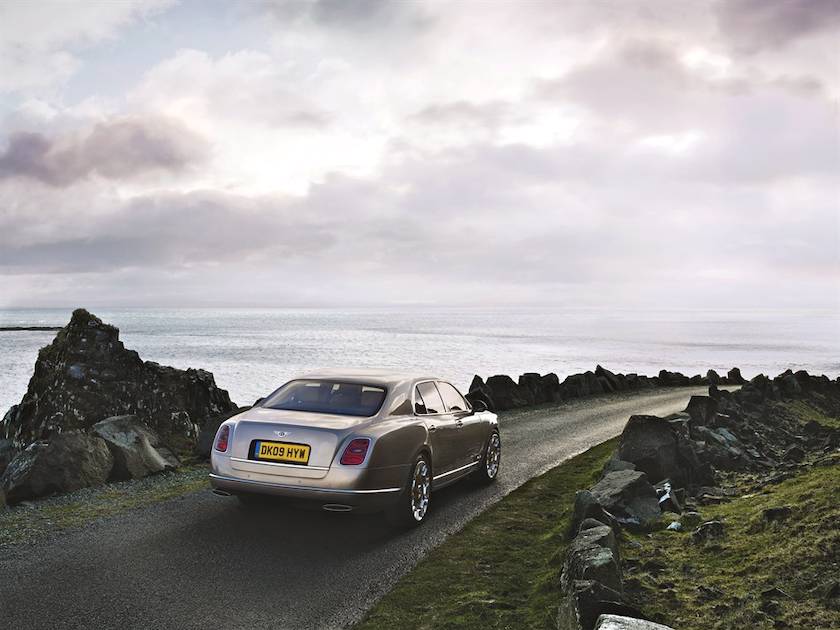 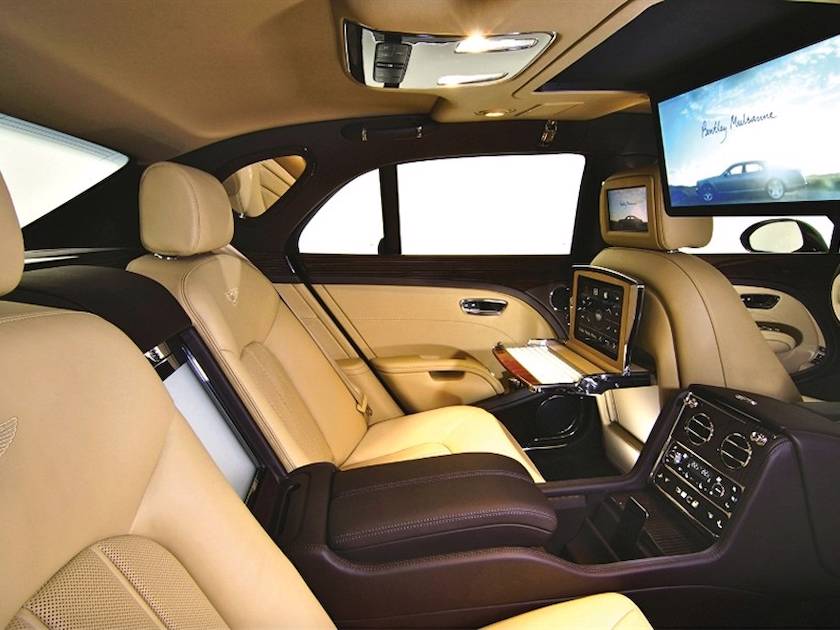 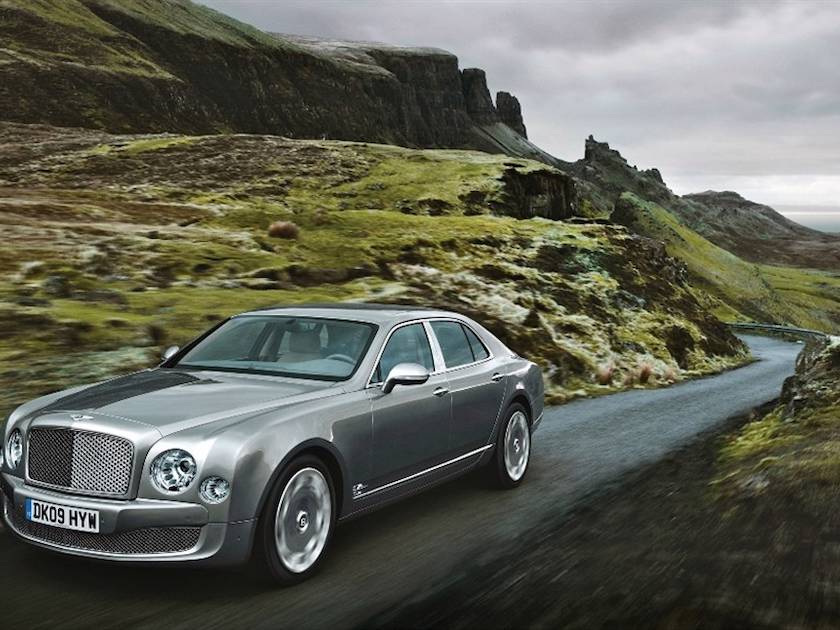 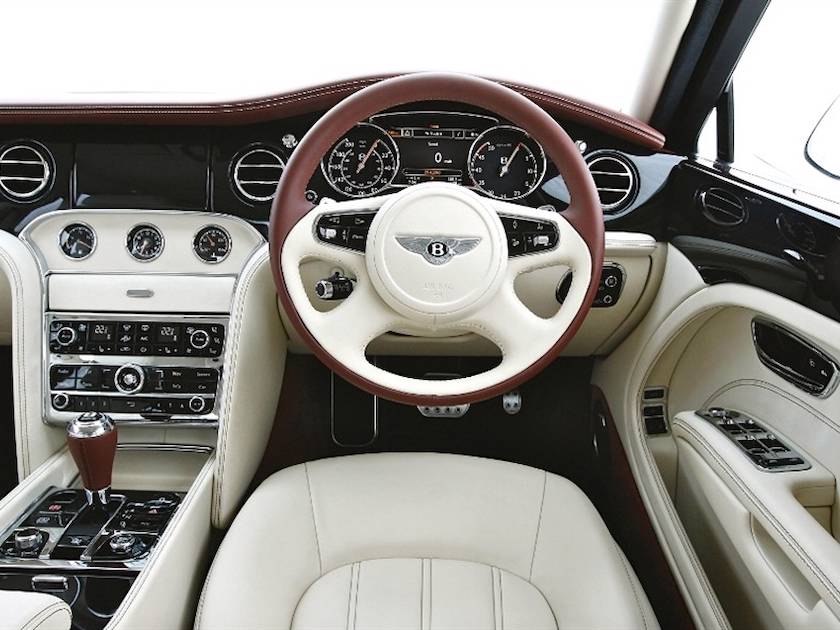 Walter Owen Bentley dreamt of creating a car at the pinnacle of motoring. Something large, fast, refined and comfortable. With the new Mulsanne his dream has come alive.

I sat in my beloved armchair and watched the television coverage of Her Majesty Queen Elizabeth II's Diamond Jubilee. The Royal Party were aboard the Royal Barge, Spirit of Chartwell, leading a flotilla of over 1000 ships sailing down the Thames. The scene was reminiscent of a Canaletto masterpiece.    As I sat drinking in all aspects of the proceedings with patriotic thirst, I noted that Her Majesty The Queen arrived in a new Bentley Mulsanne. This reminded me of the pleasurable experience I had enjoyed only a few days prior when I had been granted the honour of driving this luxurious leviathan on the twisting rural roads of Bedfordshire.

User friendly. The Bentley Mulsanne is, to date, the most expensive car I have ever driven. Initially I felt apprehensive at the prospect of momentarily losing concentration and damaging one of the beautiful aluminium body panels. Any personal liability could result in a pecuniary loss I would be repaying for years to come. However, my fears were swiftly allayed by the user friendly demeanour of the Mulsanne.    The first thing that struck me about the engine was the absence of noise. Initially, I wrongly assumed the car was sluggish as there was no sense of revs building, no obvious pitching of the body, but then with a glance at the speedometer and look in the rear-view mirror, I soon realised that this was a swift express.

Stunning comfort. The 6.75 litre power plant is a model of refinement. Quiet and smooth, it whispers with decorum and civility. However, the engine clearly has a sporty persona denoted by the impressive performance figures which would shame many a so-called sports car.    The ZF 8-speed automatic swiftly changes ratios seamlessly. It was only the rev counter needle which betrayed to me that an alternative gear has been selected.My passengers were blissfully unaware. It was so smooth. The ride comfort was stunningly sublime. Road surface undulations were smothered by the cosseting ride. Some cars honed on billiard-table smooth autobahns, feel unsettled on Britain's cash starved blacktop, not so the Bentley. This car wafted along highways with serene refinement.

Personalised ride. The trade-off for comfort is often a wallowy ride lacking precision. However, this is where the Bentley rewrites the rule book. The electronic air springs dampen magnificently, yet allow the driver to explore the performance of the vehicle with great confidence. I played with all three of the standard available suspension settings; "Bentley", "Sport" and "Comfort" and found "Bentley" was my preferred choice. But, the beauty of the Mulsanne is you can even personalise the ride to suit your own taste with the "Custom" setting.    The car is a behemoth with an overall length of 5575mm, affording a commodious cabin for occupants to luxuriate within. However, there are two potential negatives with the large dimensions of the Mulsanne; weight and manoeuvrability. These two potential disadvantages are inextricably linked, but with the widespread use of aluminium the kerb weight is 2585 Kg. This remains a significant mass but not when you consider the footprint of the Bentley and the long inventory of creature comforts it bestows upon the occupants.It is remarkable it is not substantially more.

Decadent tactility. The ride for me is a fundamental revelation which distinguishes this car from anything else, but to overlook the other key aspects would be to short change the artisans of Crewe.    The interior is palatial. The seats have more in common with my favoured armchair than any car seat I have occupied before. The cream hide of my test car was beautifully stitched. The centre inserts of the seat were presented in a quilted, diamond shape pattern, proffering decadent tactility. The steering wheel was detailed with perfectly presented cross-stitch, no errant threads visible. The carpets are plush, encouraging the Choos and Laboutins to be kicked off for a moment of luxurious bare toe nuzzling in the deep pile.

Hand-made beauty. It apparently takes over 170 hours to craft the interior of the Mulsanne and I see very little reason to doubt Bentley's claim. This car is about harnessing craftsmanship and expertise borne of experience. Hand-made beauty is evident wherever you look. The Mulsanne goes beyond expedient mass-manufacture.It is the embodiment of perfection, where anything less is unacceptable.    The wooden veneer dashboard had a mirror-like appearance. The rich grain of the dark stained burned walnut, visible through the numerous layers of varnish, was perfectly matched. Wood circumnavigated the interior cabin with a waistrail running along the interior of the doors, rear parcel shelf and the aforementioned dash. I have never seen wood veneer more beautifully executed within a car's cockpit.

Numerous choices. The traditional finish of the Mulsanne, with the bulls-eye air vents and organ pull levers sits happily with the modernity of the technology provided for the convenience of driver and passengers alike.    The compendium of comforts provided is mesmerizing.No whim or wish of the purchaser is left wanting. Bentley does offer numerous opportunities to personalise their car further with a bamboozling array of paintwork and upholstery options in various hues, but I fell in love with the blue tincture of my test car "2000 TU".

Majestic persona. The exterior of the car is imposing. Large circular headlights, one each side, are flanked by smaller lamps, again one each side. The design language is original and imparts a majestic persona in keeping with the cars target market.    The superformed aluminium front wings have numerous angles which capture light and show the deep lustre of the paint shops craft. There is little front-end overhang, in stark contrast to the rear where the overhang is significant. This results in a car which appears to lean forward, hungry to devour the tarmac ahead, its strength and prowess underscored by the muscular haunches of the front and rear wings.

Conclusion. It is a good time to be British. The Diamond Jubilee and the Olympics are two significant highlights of 2012. This car encourages patriotism. Whilst the parent company may be domiciled in Wolfsburg, the essence of this car is British.    The historical manufacturing facility in Crewe has provided a modern car, intrinsically contemporary but harnessing all the tradition and craft of cars which have worn the flying B badge for decades.    Sadly, my tenure with the Mulsanne was short-lived. Whilst the Royal Flotilla may have been a modern day reproduction of a Canaletto scene, the Mulsanne is an original piece of automotive art I would dearly love to own.