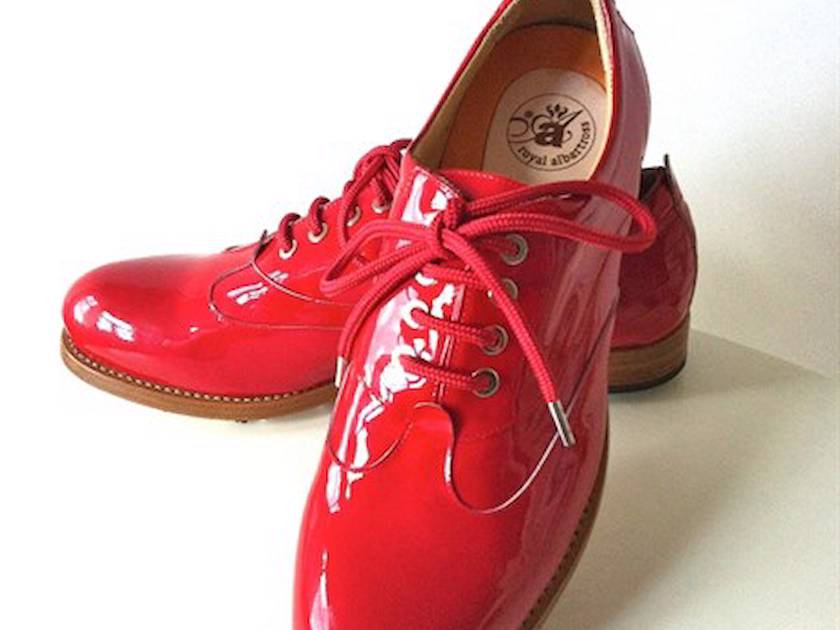 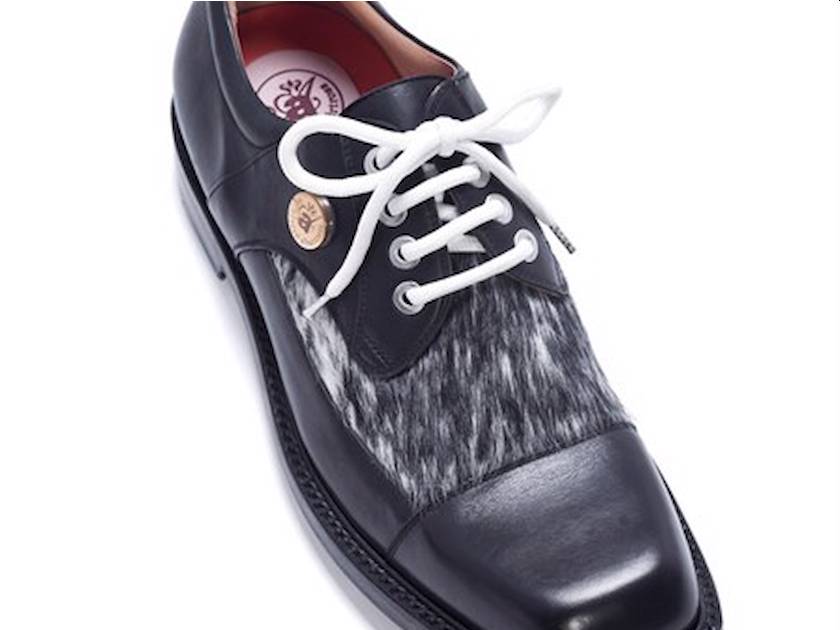 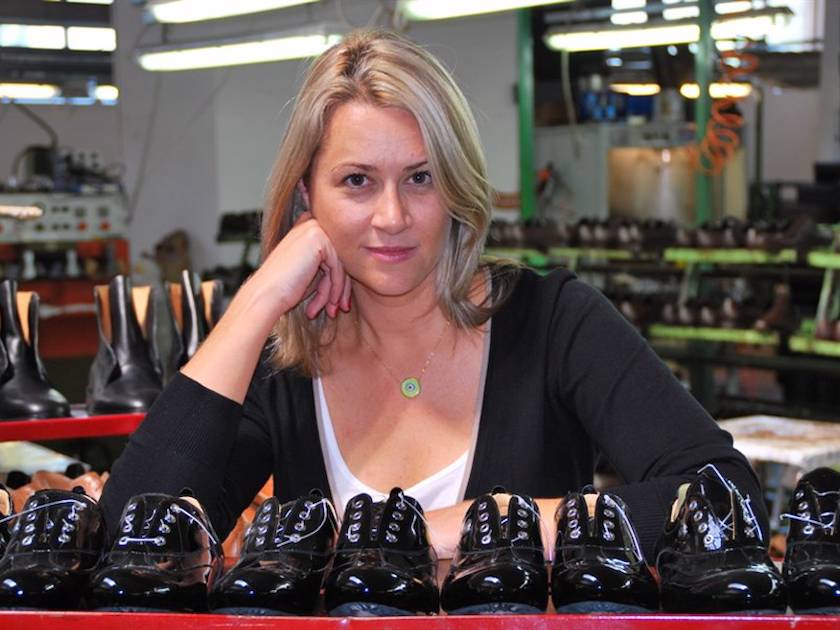 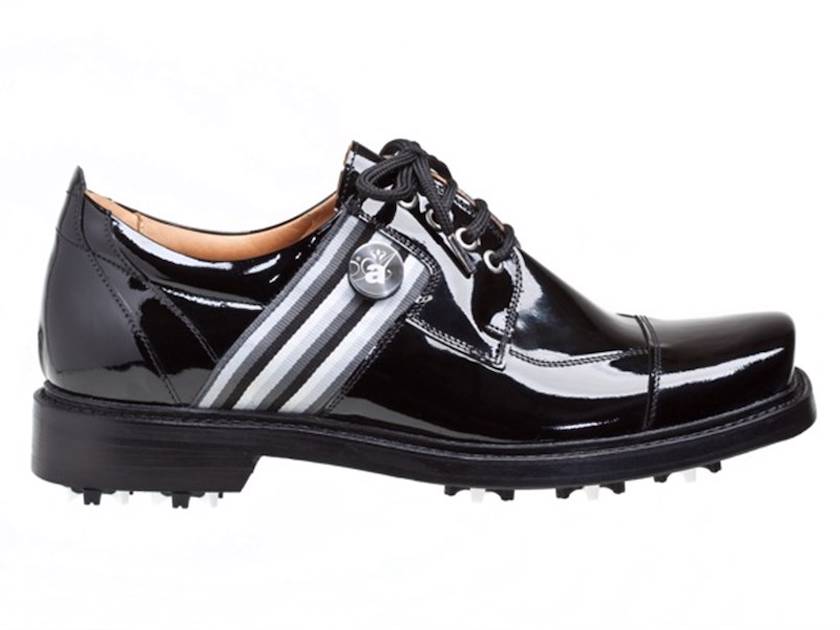 Seen as the ultimate footwear by many golfers, Royal Albartross is the brainchild of a young British designer whose ambition was to create the world's finest golf shoe. A shoe that not only would satisfy all the requirements of the discerning golfer but that also would make a fashion statement. Rumor has it - it's catching on.

“Fashion Law: If the shoe fits, it's ugly.” ~Author Unknown

“Give a girl the right shoes, and she can conquer the world.” ~Marilyn Monroe

We're driving through the Province of Ancona in the Marche region of Italy, where the coastal strip along the Adriatic Sea with its wonderful sandy beaches is mostly popular among Italians rather than foreigners. But we are soon leaving the coast moving inland, an area of rolling farmland with sloping vineyards and hilltop towns close enough for people to shout across.     The area is known for producing red and white wines mainly of the Sangiovese, Montepulciano and Verdicchio grape varieties, whilst the mountain zone further inland is famous for its black truffles. Well, I'm not here to sample the agricultural gems of the area, but rather to visit a shoe factory, namely the one that makes Royal Albartross golf shoes.

The entrepreneur. We've heard golfers rave about them, seen pictures and even had ads for them in the magazine, so we decided to find out more about this exclusive footwear. That's why I now find myself in a car driving through winding roads on an Italian countryside with Alex Bartholomew, founder, company director and designer of Albartross shoes, to pay a visit to the factory that makes them. As requested by my travel companion we won't mention the name of our final destination.    It is not a particularly picturesque town, rather a bit grey with a mixture of new and old buildings that have seen better days. The factory itself, an anonymous looking building which in no way reveals that, within these brick walls, they're making shoes of the very finest quality and not least the golf shoes we have come to see.

The smell of leather. We are met by the boss himself, Mr. Genesio, and the young Antonluigi, who is Alex' contact person and who, on this occasion also acts as translator since Mr. Genesio speaks no English. As soon as we enter the factory floor we are greeted by the unmistakable smell of leather. Shoes are everywhere and a handful of employees are busy working with the different stages of the production.    This is no high-tech factory that spews out thousands of shoes every day. Here the shoes are crafted by experienced workers using traditional hand tools and three generations of carefully preserved techniques. Each golf shoe requires more than 250 tasks including stitching the leather, moulding and compressing the upper onto the last and attaching the cleated sole. Believe it or not, it actually takes eight weeks and 70 hours of precise craftsmanship to finish each pair.    Walking through the factory with Mr. Genesio I can clearly see that this is a painstakingly slow process. Nothing is left to chance - from the choice of the finest French calf leather down to the smallest details of the finishing touches, everything has to be perfect.

A coincidence. Back at the hotel we have time before dinner to sit down for a chat with Alex to find out what made her start making golf shoes.    Born in Zimbabwe to British parents and growing up in South Africa, Alex was not a stranger to golf, but when she at 19 moved to the UK to study Fashion and Textile design at Brighton University, golf was the last thing on her mind.    "It was actually a bit of a coincidence. During the course at the University we had a period of work experience within the industry and I ended up working for a shoemaker. I've always been interested in shoes so when I came back to the University I told them I no longer wanted to do textile, I wanted to do shoe design.They convinced me that I could continue the course and make shoes from the materials we had available. When I was told that one of the men's shoes I designed looked so much like a golf shoe, I decided that this was something I wanted to explore further."

Found supplier. Alex went on to Cordwainers College in London, continuing to focus on shoe design. Her first job came as a quality controller at LK Bennett and later as a consultant with Burberry. While working for Burberry she spent a few months in Florence, Italy, and here she found a supplier that was interested in her shoes. The time had come to find a shoemaker.

"It certainly wasn't easy. I wanted to make shoes that not only were beautiful but that would need to have the right grip, the stability and support, and of course be comfortable; finding the right shoemaker was essential."    While searching Alex had contact with several manufacturers before finding this small family run factory in Italy, who were experts in quality workmanship and small production runs.    "The others were either too big, didn't have the right approach or charged too much. Mr. Genesio and his workers are highly skilled shoemakers who are dedicated to perfection. I feel lucky to have found them,"

First collection. In 2007 Alex had her first sample range of ten pairs of men's shoes ready to take to a Trade Show in Orlando, Florida. There was no doubt her collection made an impact for the orders started to build up.    In 2009 with the help of a personal bank loan and her husband's backing, she launched the website which, beside a growing number of retailers around the world, stands for the majority of her orders today. So what are the secrets behind all her achievements?    "I believe it's the finer details that you cannot get from a "thousand-of-pairs-a-day" production line that make the difference. The polished lace tips, stainless eyelets, extra padded collars and the beautiful smell of leather that you are greeted with when you open each box. We have deliberately broken boundaries and added shots of exotic colour to the regular footwear palette allowing you to be who you are. People like to be noticed and I think our shoes make a fashion statement."     Over dinner that evening at Casa de Campo, Alex' favourite agriturismo restaurant, we continued our talk about golf and fashion and what lies ahead for Royal Albartross."We have just launched a new ladies' collection which I'm very proud of. They are a fashionable take on traditional golf shoes without losing the appeal of classic proportions and brogue detailing. They are beautifully made, using the highest quality leathers, featuring our signature metal lace tips and high-shine eyelets. The colours are on trend and will appeal to a range of stylish Lady golfers, from the conservative to the more flamboyant. We are also in the process of introducing a cheaper, spike-less shoe that can be worn in the club house as well as on the green."

No large empire. "It's not a huge factory, do you think you can deliver if demand keeps rising?"    "Expanding is not a problem, but I'm not interested in building a large empire and I don't need lots of money. What I want is for people to love the shoes and, as for myself, I wish to stay true to the idea and the ethics I had when I started out."     Seeing the workmanship and care that goes into making each pair of Royal Albartross shoes has convinced me they're worth every penny, and even if they don't make you play better golf, at least you know you are looking good. 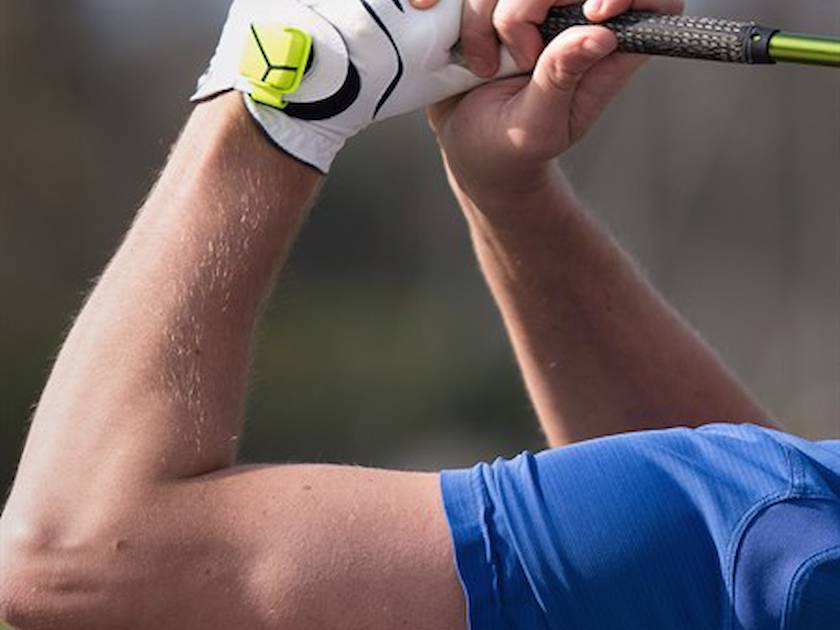 Shooting from the Hip with Zepp Golf 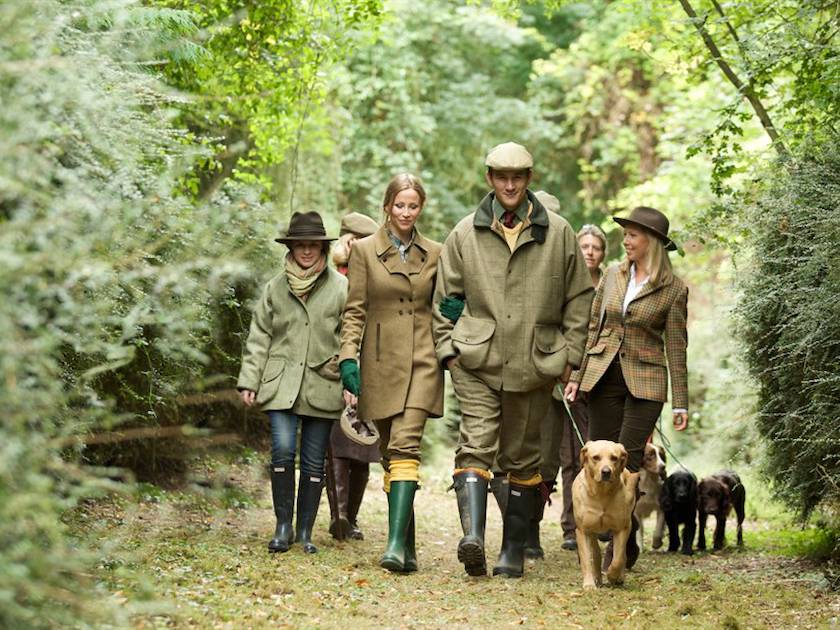 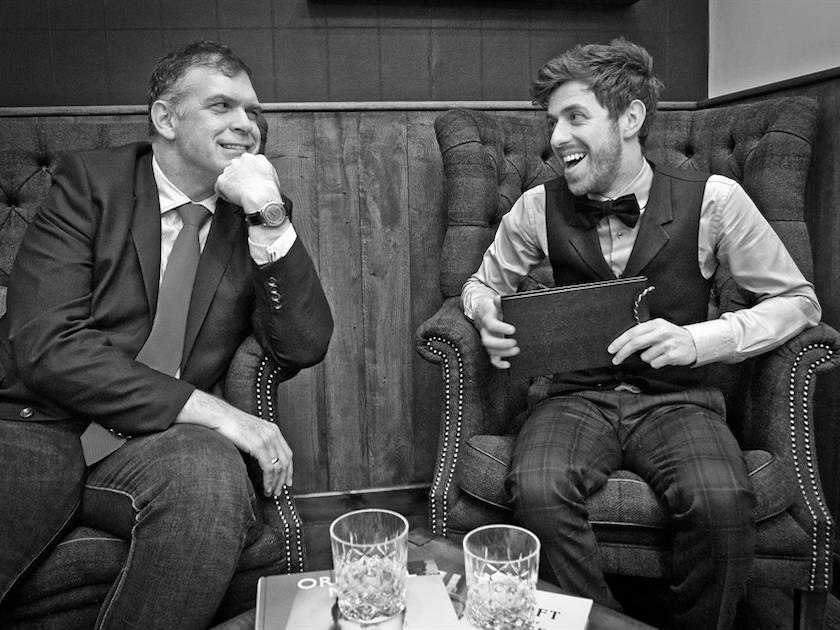 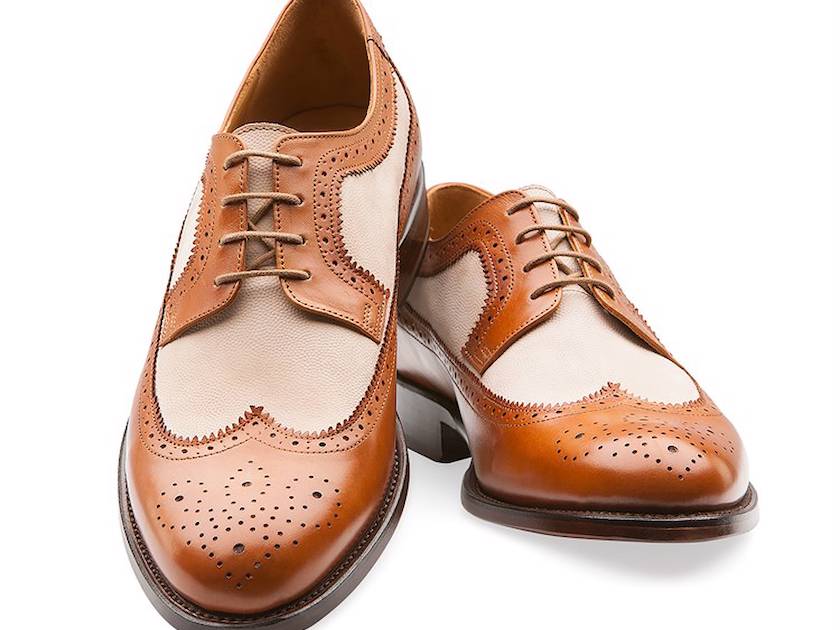 The Left Shoe Company - One step beyond 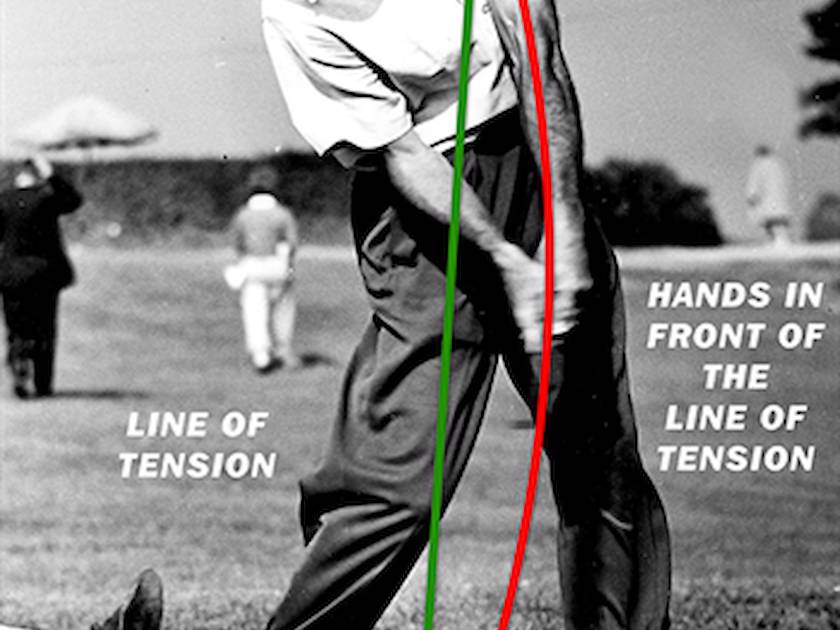