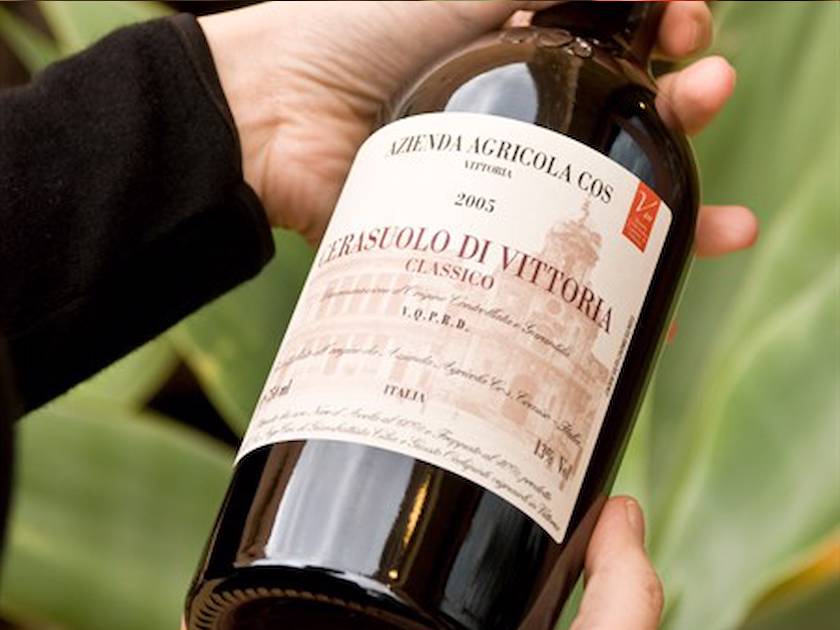 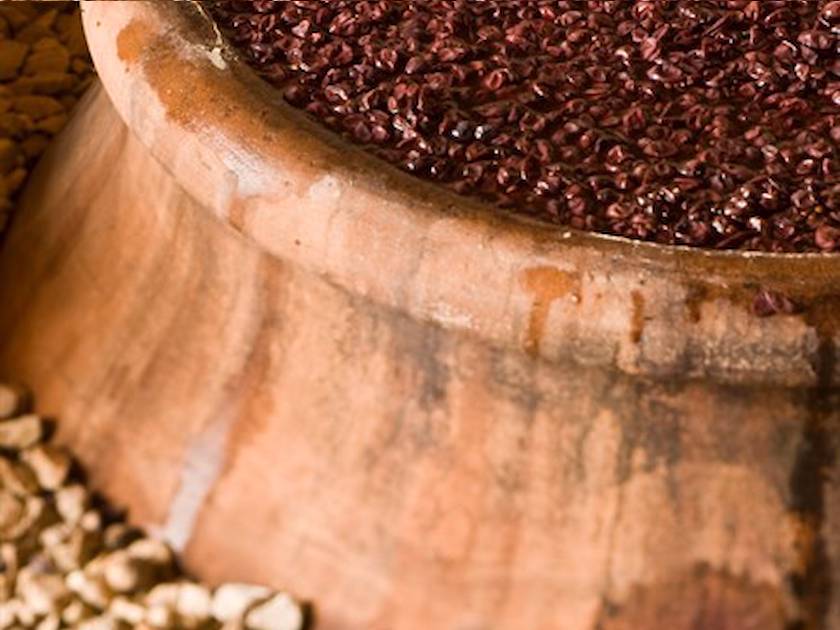 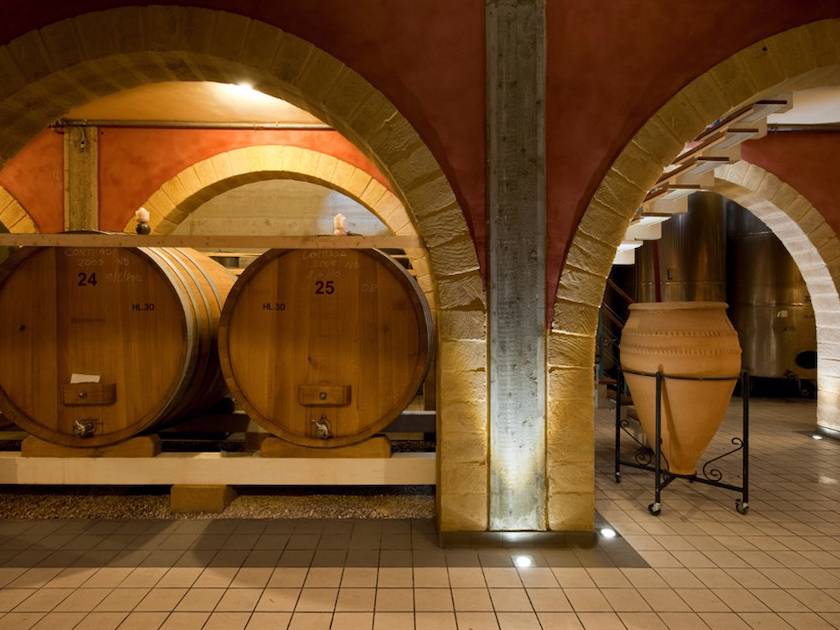 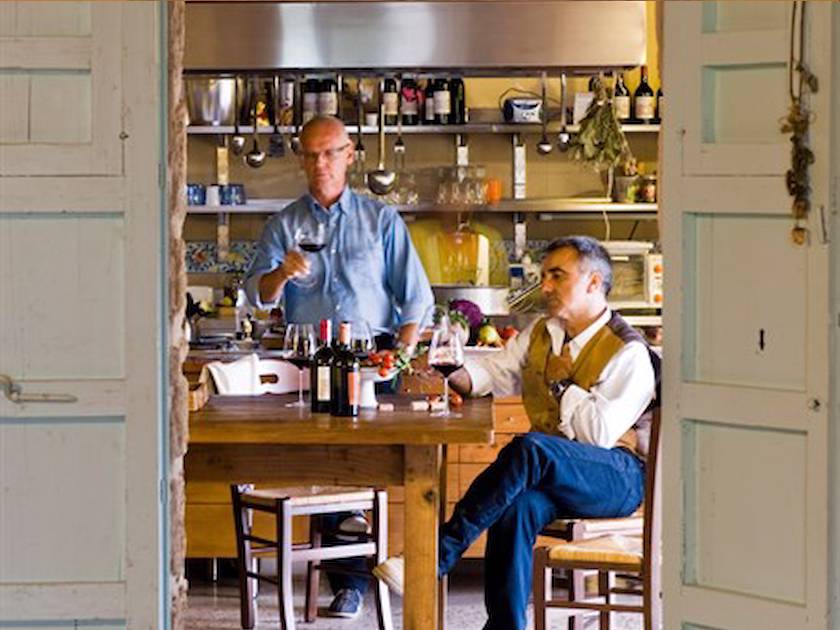 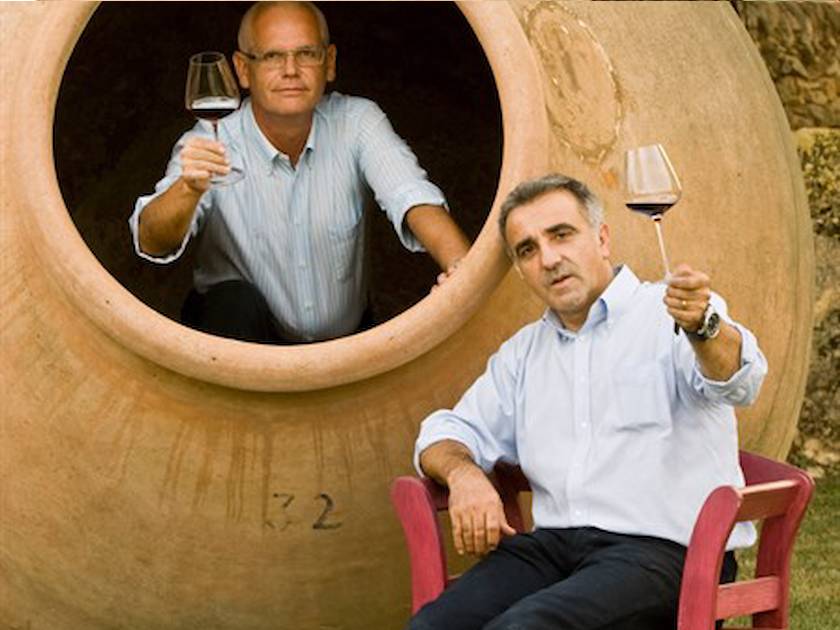 Legend has it that Ulysses pacified the cannibalistic Cyclops by offering wine from Mount Etna. The divine drink was so intoxicating that the one-eyed monster described it as drinking "nectar and ambrosia all in one." And in today's Sicily they are still producing wines worthy of the gods, but they always spare a glass or two for a weary traveler.

No one should go to Sicily without tasting the wine, so on my trip to Donnafugata Golf Resort earlier this year I took the opportunity to visit Azienda Agricola COS, a local wine producer near the town of  Vittoria in the southeastern region of the island.

The company was founded in 1980 by Giambattista Cilia, Giusto Occhipinti and Cirino Strano, three friends who wanted to take up what had once been the work of past generations. The acronym of their surnames  gave the company its name, and at the time they started they were the youngest winemakers in Italy. The company follows the principles of biodynamic viticulture to keep in balance and harmony with nature and let the wine express the character of the various soils.It's not like wine making is anything new on this beautiful Mediterranean island, in fact there is evidence that Mycenaean traders cultivated grapes here as early as 1,500 BC. When the Greeks began to settle in Sicily in the 8th century BC, they too were unable to forgo their favorite libation, "oinos", and introduced several varieties of vines.

At the COS Winery, history is repeating itself. Here they are replicating the ancient method used by the Greeks and the Romans by storing wine in giant amphoras, a vase-shaped container made of terracotta. How this came about and why, co-owner Giusto Occhipinto explains: "We started using these vessels with the 2000 vintage, partly out of curiosity and partly because we were tired of using barrels. The first few attempts were not completely successful and it took some experimenting to figure out how to make it work."

The one hundred and fifty 400-litre amphora's used are based on an ancient Spanish design with three types of clay. They are stored underground in a deep bed of gravel - firstly for stability since the amphora are almost egg shaped, but also because being submerged keeps the temperature constant and cool."The wooden barrels somehow tend to alter the wine," says Giusto, "We felt it would hide the true distinction of the wine from our territory. The clay in the amphora is a material that breathes like wood, which is very important for wine, but does not give any characteristic flavor.  We feel this will accentuate more accurately the origin of the grapes and the wine, because we think the wine is an expression of the earth where the grapes are grown."

Twenty years ago there were little more than three dozen commercial wine producers on the island, today the number is nearer three hundred. In fact, Sicily now has more vineyards than any other region in Italy, and while most produce grapes for the production of marsala, a sweet and dry fortified wine, many are now focusing on traditional red and white wines. Sicily now produces twice as much wine as Australia, and it has become the island's main source of income.

Sicily offers excellent natural conditions for viticulture. Mountainous terrain and thin volcanic soil with good drainage create perfect conditions. The best vineyards are often located at higher altitudes, in some places at up to 1000 metres above sea level where steep slopes give the grapes excellent exposure to the sun. The night time temperature at these higher climes is lower, which means that the grapes develop freshness and complex aromas, thus avoiding the "boiled" and pickled fruit character that might otherwise be a problem this far souThe southeast of the island is much drier than the north, and the landscape is characterized by lower hills which are suitable for different varieties of grapes.

The  COS Winery has become synonymous with Cerasuolo di Vittoria DOC, a medium full-bodied, juicy and often slightly sparkling red wine from a blend of the grapes Frappato and Nero d'Avola. These wines are intended to be drunk young, when they have their charming, cherry-like fruit flavor intact. Employing used barrels rather than new, COS produces arguably the finest versionof this delicious wine. They also make a fine Frappato and an excellent Grecanico called Pithos Bianco. Some of Sicily's most exciting wines are being made in Vittoria. They often have a fruity flavor, together with hints of spice and minerals.

The character of the soil

Says Giusto "Firstly, we were interested in finding out how the minerals in the soil influenced the vine. "We harvest the grapes at different times in order to obtain the maximum result from different maturations. Although the grapes for some cuvees, such as Pithos Bianco, can macerate in the amphora for up to six months, the amphora only accounts for 40% of the total fermentation process, with the remainder carried out in separate tanks, terracotta of course being the natural choice."

The winemaking process in amphora is similar to conventional techniques, however, the breathability and the ability to maintain low fermentation temperatures of 28/30 °C without any interference of flavoring from wood, makes all the difference."There is nothing magical about the amphora, it's all down to the quality of the grapes. I feel this process gives more precision, a purer flavor of the grapes and the land where they're grown," says Giusto Occhipinto.If you happen to travel to Sicily around the 11th November, the day dedicated to Saint Martin, look for signs announcing the local Festa del Vino or "Festival of the Wine". It is believed that on this date the new wine is ready for consumption, hence the saying: Il giorno di San Martino il mosto diventa vino, or "On Saint Martin's Day the grape juice becomes wine."

This is a varietal Nero d'Avola aged in stainless steel. Sweet, ripe and cherryish with a bit of warmth and spice on the nose. There's some earthy depth on the palate and nice spiciness. Elegant and warm.

This is the same blend as the Cerasuolo, but it's fermented in amphora. Superbly elegant, subtly meaty cherry fruit nose. Floral. The palate is profound: elegant pure and mineral with lovely spice and earth notes. Some complexity, and a bit of tannic structure.

Cabernet and Merlot with a splash of Nero. Sweet, slightly volatile nose with liqueur-like cherry fruit. The palate is fruity, sweet and pure with cherries and a tannic, spicy edge.