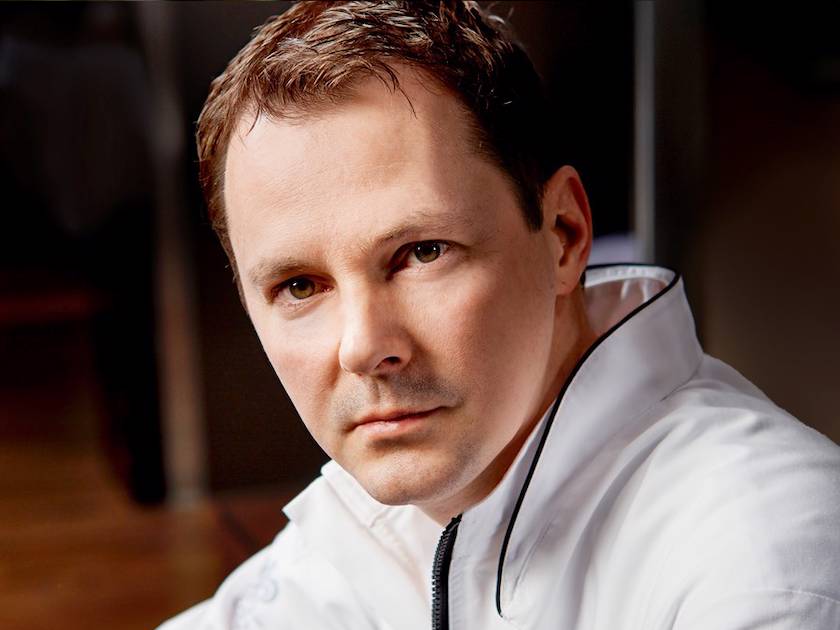 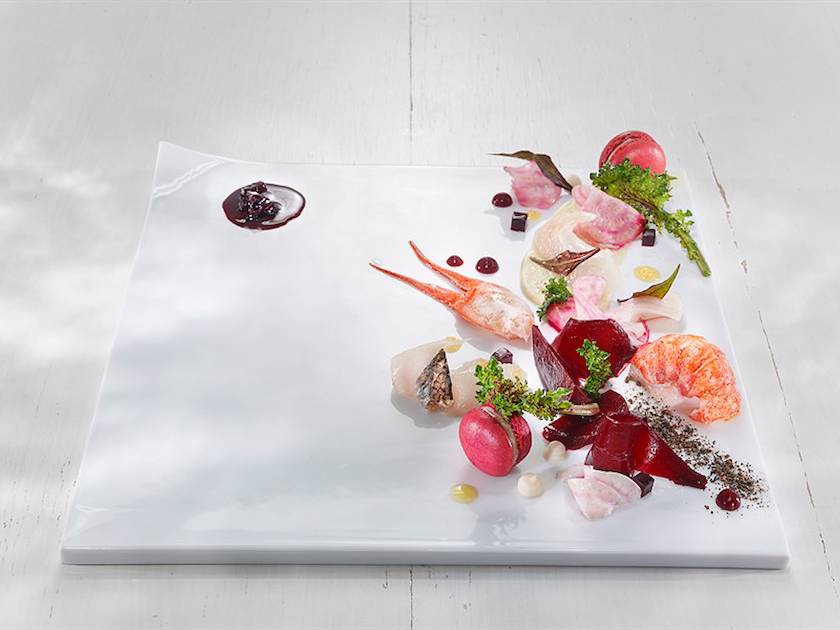 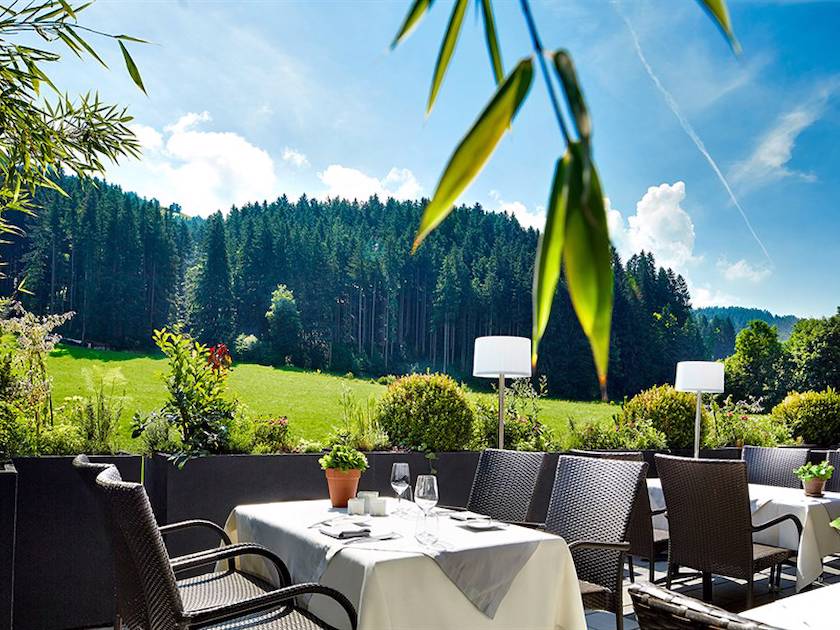 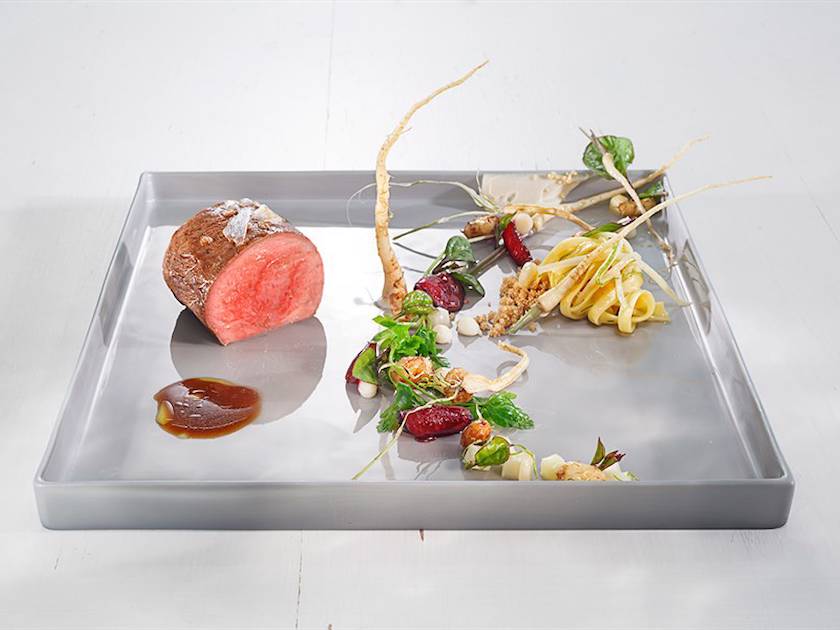 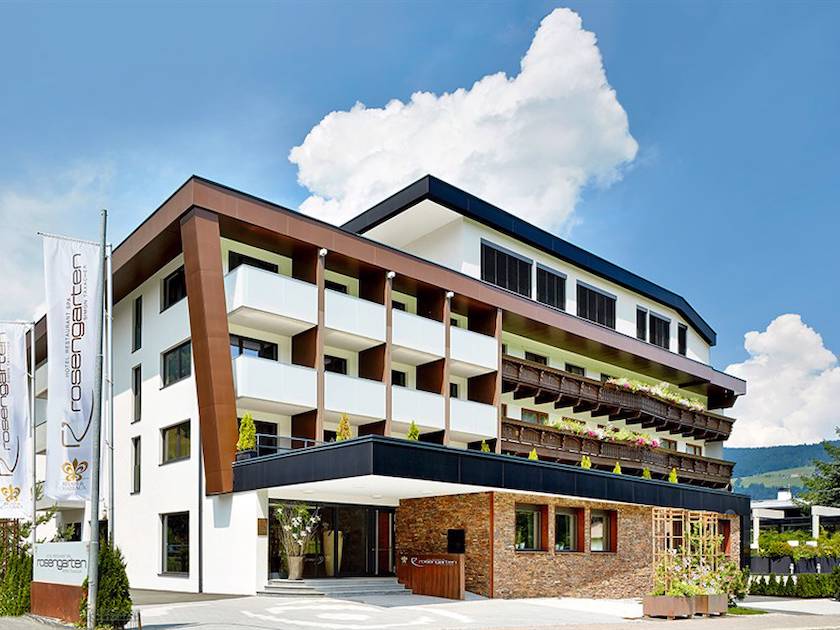 The hills around the tiny alpine village of Kirchberg, near Kitzbuhel, are alive with heady aromas and the sound of golf. Top Austrian chef Simon Taxacher dishes up a delicious blend of both…

If you go into the woods at the southern end of the Tyrolean village Kirchberg early on a spring, summer or autumn day, you’re sure of a big surprise.

You won’t see picnicking teddy bears, but peer through the trees and you will spot chefs from the chic local Rosengarten Hotel foraging for wild herbs and alpine flowers. They are sent out picking at 8am every day by owner Simon Taxacher, one of Austria’s top chefs, to ensure diners have the freshest of ingredients, sourced as locally as possible for that day’s menu.

Just 7km from Austria’s alpine playground, Kitzbuhel, the Rosengarten is an oasis of contemporary luxury amidst the craggy ski mountains and verdant slopes of the surrounding Kitzbuhel Alps. A member of the prestigious Relais & Chateaux network, it offers 26 rooms and suites plus a spa and an award-winning restaurant in a setting that’s as much a feast for the eyes as its cuisine is for the other senses.

I am staying as a guest of Taxacher’s to take part in the hotel’s annual Golf & Gourmet Trophy, combining a fun golf tournament with glorious food. While the Kitzbuhel area is famous for skiing (the town stages the Hahnenkamm downhill ski race every January), it is relatively unknown as a golf destination – yet there are six golf courses within a 10km radius.

GOLF AND GOURMET. A late convert to golf, only taking it up four years ago at the age of 37 when he also launched the tournament, Taxacher tells me his aim is to make the Rosengarten the golf and gourmet centre of Austria. Golfers are also often food connoisseurs, he points out, and he wants his hotel to become a base for golfers from the UK and other countries looking to enjoy fine dining alongside playing golf in the mountains.

He may be a high handicap golfer, but Taxacher is a class act in the kitchen. In 2009, he became the first chef in the Tyrol to gain two Michelin stars – still a unique honour as Michelin stopped producing its guide for Austria the following year. He has also won many honours including being named Austria’s chef of the year, while the hotel’s eponymous Simon Taxacher Restaurant – a member of global gourmet association Les Grandes Tables du Monde – was joint top restaurant in Austria for both 2016 and 2017 in the prestigious Laurent-Perrier Hornstein rankings.

The restaurant’s food style is ‘Mediterranean meets the Alps’. This is in reference to the French Mediterranean cooking influence Taxacher picked up while understudying top chefs from two and three Michelin-starred restaurants in Germany and Austria, after graduating from Innsbruck’s Villa Blanka hotel management and cookery school. Taxacher set up on his own in 2000, taking over a three-star hotel in Kirchberg owned by his parents and opening a gourmet restaurant. He built a new restaurant and kitchen in 2004, still in the old building, before having that end of the hotel torn down in order to build the five-star Rosengarten hotel in 2010.

While Taxacher masterminds the kitchen and its staff (seven cooks in summer, 12 in winter), the hotel and its guests are looked after by his partner, Sandra Kobald, the Maitre de Maison. The adjacent, 38-room three-star Taxacher Hotel also comes under their wing, with Taxacher’s parents still helping (although they are retired), but it is run as a totally separate operation. His sister is also involved, preparing breakfast at the Rosengarten, making it a real family affair.

The culinary forte of this chef is infusing local produce with the Med influence. He meets local famers and artisan producers regularly and devises two or three new dishes for the menu every few weeks based on their latest products. Local specialities that often find their way into dishes include saibling (a mountain char only found in that region), sheatfish (European catfish), reinanke (a small alpine lake whitefish), wagyu beef (from a local breeder), venison and edible wild flowers such as chrysanthemums, scorpion grass (a type of forget-me-not) and sweet woodruff.

As well as the main restaurant, there is a smaller bistro restaurant, a cookery school and studio and a meeting room that can be used as a private dining room. The breakfast room has an outdoor terrace looking over the woods where the chefs go herb-hunting, but guests who prefer a lie in can opt for in-room dining with the Rosengarten Butler – a wooden box on a stand with drawers and an opening lid that reveal the breakfast.

FOOD GLORIOUS FOOD. Alongside fellow tournament guests, who come from Germany, Switzerland and other areas of Austria, I enjoy an introductory dinner including a dessert garnished with scorpion grass. After which I tee off for a practice round on Kitzbuhel’s magnificent Eichenheim course, several holes of which are towered over by the mighty Hahnekamm mountain.

That evening, Taxacher hosts a get-together with local tournament participants. We tuck into dishes presented like works of art, including amuse-bouches of kaspressknodel (cheese dumplings) and sweetbread with asparagus and kumquats, and mains such as reinanke Jerusalem artichoke foam soup with curd cheese ravioli, roast beef and paprika and basil gnocchi. All accompanied by Austrian and German wines and finished with local cheeses or a bourbon vanilla parfait with blueberries and woodruff.

We should be outside but a summer thunderstorm puts paid to that. Thankfully the tournament day dawns with crisp blue skies. There is a Stableford competition, which I play in, and a Texas Scramble. Both are played at Golfclub Westendorf, 15 minutes from the Rosengarten, outside the picture-postcard village of Westendorf. The area’s newest course, it opened four years ago, hosts the tournament every May.

As we near the end, Taxacher rustles up some tasty, gourmet snacks by the 9th and 18th greens to keep us nourished. This is living the good life.

Prize-giving that night follows a ‘Kitchen Party’, during which we watch the chefs cook some of the hotel’s signature dishes and sample them, as well as trying a selection of wines brought by local winemakers. I come a respectable fifth out of 10 in my class. But with such incredible food and hospitality in some of Europe’s most stunning scenery, we are all winners.

Besides the annual Gourmet Golf Trophy, the Rosengarten offers golf and gourmet breaks from four days to a week between May and October (the hotel is closed in April and November), starting at 835 euros per person for four nights’ accommodation with breakfasts, a six-course gourmet dinner in the signature restaurant and three five-course dinners in the bistro restaurant, plus a Golf Alpin Pass with three green fees.

That’s haute cuisine at a steal!