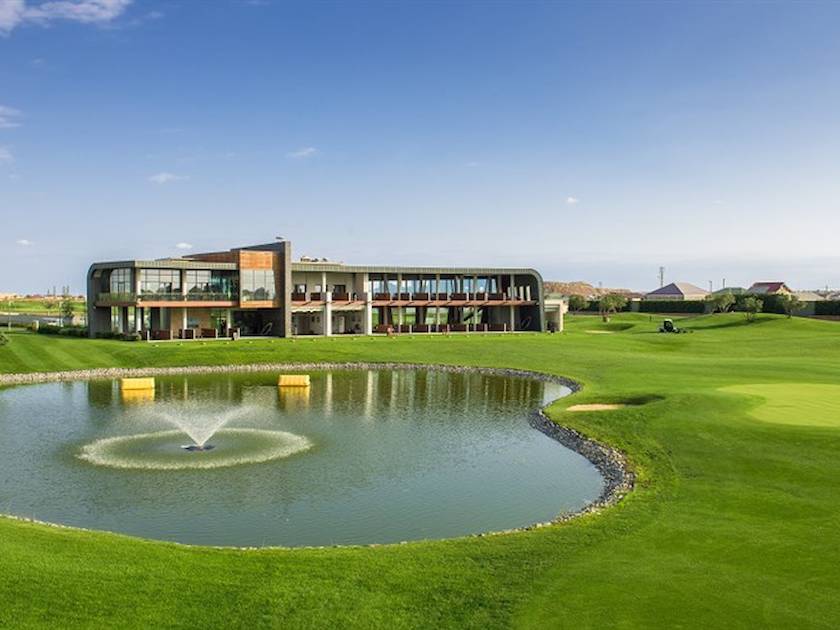 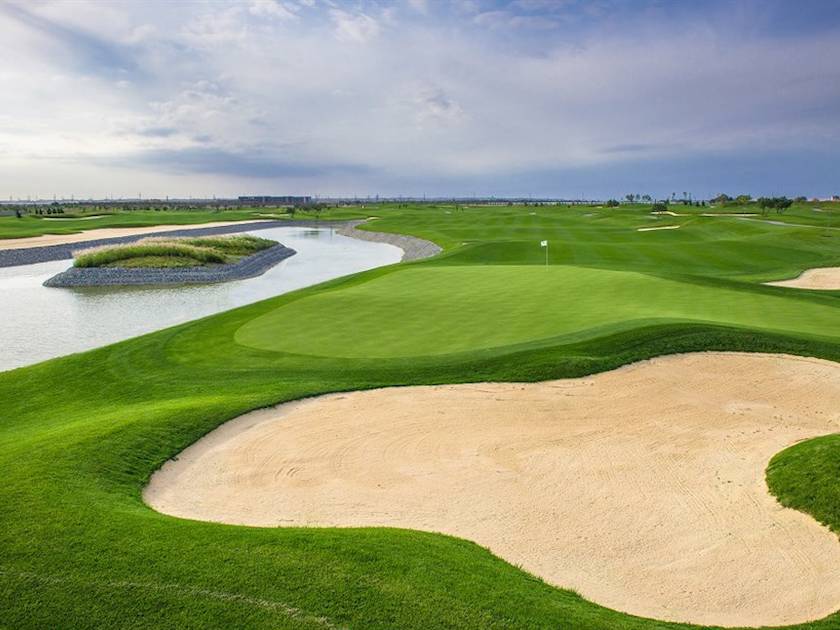 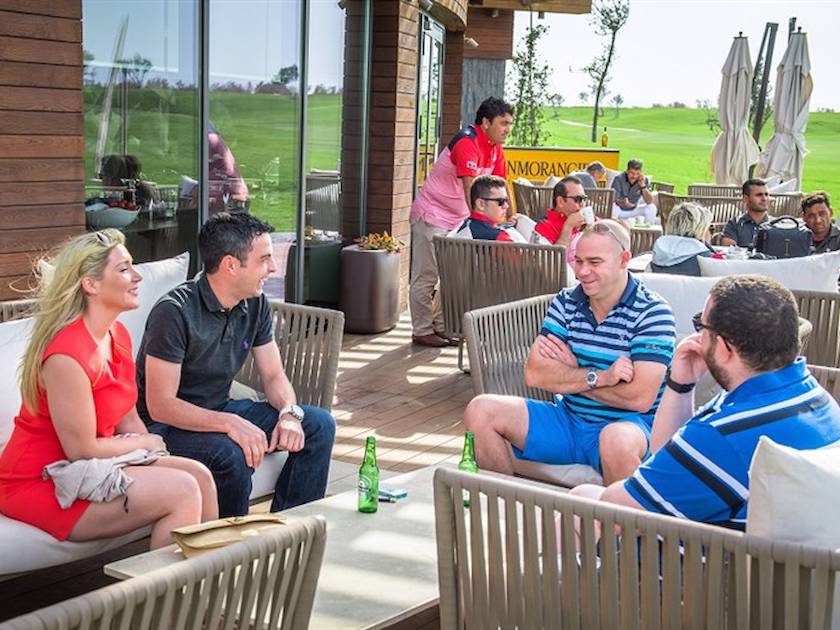 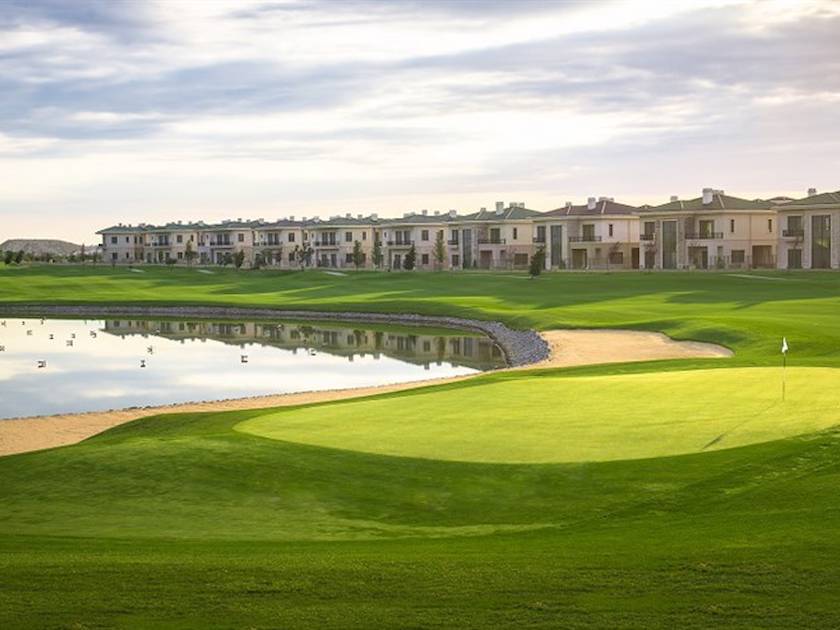 Exotic, historic and mesmeric, Andy Hiseman leapt at the chance to visit one of Eastern Europe’s most spectacular cities, Baku, in Azerbaijan and its ambitious new golf resort…

My destination is Dreamland Golf Club, which opened in autumn 2015, just 20 minutes east of the city of Baku. With luxury housing and shopping facilities, plus an on-site SABIS Sun International school, the multi-faceted upscale community is wrapped around an impressive, tour-length golf course. And I can’t wait to check it out. Before that, though, let’s explore Azerbaijan, the Land of Fire, and its capital city Baku.

CITY OF WINDS.  Azerbaijan remains a mystery for many westerners. Situated on the furthest tip of Eastern Europe, at the crossroads with Asia and on the western shores of the Caspian Sea, Azerbaijan’s capital city Baku is as little as a six-hour flight from the UK direct from London.     Baku is the lowest-lying national capital in the world, at 92ft (28m) below sea level. Although the Azeri people do not habitually learn English – many Azeris have Russian as a second language – Baku’s status as a magnet for western businesses means that you will have no problem finding English-speaking assistance in the city itself – and indeed at the golf resort.     In the summer Baku enjoys a pleasant Mediterranean-like climate, and its nickname ‘City of Winds’ is well deserved, so the heat never feels oppressive. It offers a perfect warm-weather golf holiday, especially compared to intimidatingly hot Middle East destinations.     Azerbaijan was part of the Soviet Union until gaining independence in 1991, and Baku is home to many giant corporations from the oil and gas industry – which has led to its reputation as something of a party city.     In fact, Lonely Planet puts Baku in the world’s top ten cities for urban nightlife, with scores of luxury brand outlets, lively bars, restaurants and nightclubs. It is a truly thrilling crossover city that offers an entertaining mix of Muslim culture and Western decadence.     It is all set against one of the most stunning waterfront backdrops enjoyed by any capital city in the world. The Baku city lights shimmer fashionably on a gracefully curving bay. A host of skyscrapers, many lit spectacularly at night, represent the new uber-luxury lifestyle generated by the petroleum reserves beneath the land.     Azerbaijan is now firmly on the global sporting map: Baku hosted the European Games athletics in 2015, its first F1 Grand Prix in 2016, and it is currently preparing venues for Euro 2020 football. And don’t forget golf; IMG Golf manages Dreamland Golf Club so look for a Tour event of some sort soon.     Baku offers a beautiful golfing climate from April to the end of November, and if you can get there for Grand Prix week (it switches to April in 2018), it is hard to imagine a more exciting golf holiday.

STAY, PLAY, EXPORE.  Dreamland Golf will soon be opening its own refined 42-suite hotel, overlooking Dreamland’s superb driving range and short game area. The club can also offer ‘stay & play’ deals with several of Baku’s leading five-star hotels, including the much-photographed Fairmont Flame Towers (with its spectacular views of the Bay of Baku), the Four Seasons hotel – situated right on the F1 Grand Prix circuit – and the JW Marriott, which is close to all the nightlife.     The impressive Dreamland complex has 240 villas and 350 apartments, currently on sale to the discerning property investor, and a shopping mall filled with luxury brand stores will shortly open within the community.     Azerbaijan has plenty to explore and Dreamland can help you with this too. Baku’s historical core is the 12th-century Old City, an important UNESCO World Heritage site, and the resort can organise a fascinating guided tour.      For the more adventurous, try a daytrip to Azerbaijan’s famous mud volcanoes – which, as the name suggests, ooze bubbling mud. And yes, people do bathe in them.     Nor should you miss the incredible Burning Mountain, Yanar Dag, just half an hour from Baku. This natural gas fire blazes continuously on a hillside. See it at night: it is mesmerising. The Land of Fire, indeed.     Dreamland also arranges trips to the Amburan Beach Club, only 30 minutes from the golf club. A magnet for Baku’s sun worshippers, it is the ideal place to spend a day working on your tan, instead of your golf swing.     As for food, Dreamland offers a varied menu both at its main Lounge & Restaurant and also at Café T at the Academy. The local Azeri cuisine, based on barbequed chicken, lamb and steak, is popular with westerners. In the city we recommend the Mangal Steak House, the exquisite Russian menu at the Mari Vanna Baku, and the world-famous Buddha Bar in the JW Marriott Absheron.

TEE TIME.  But what about the golf course at Dreamland? After all, it’s what you came for. In less than two years Dreamland’s Cynthia Dye-designed golf course has already earned a reputation as one of the finest in Eastern Europe. It is in every way a five-star golfing venue, which this thrilling city deserves. The par-72 course can be stretched to an intimidating 7,478 yards, although you will more likely play from the Whites, which at 6,357 yards still offer a good test, especially when you factor in the almost constant Baku breezes.     Although Dreamland was carved out of the flatlands east of the city centre, you’ll rarely hit from a level lie on its fairways. Dye Designs golf course architect Cynthia Dye says this about her creation: “Dreamland Golf Club’s desert-like terrain meant that we were cutting into solid Baku Stone – an element which makes Baku city so enchanting, but highly challenging if you are building a golf course. Nevertheless, I think most golfers are very impressed by the undulating terrain they find at Dreamland now. Water storage was also important and has been blended in to become a feature on the majority of the golf holes.”     Dreamland’s opening two holes – both par fours – introduce you to Dye’s nicely crumpled fairways, immaculately contour-mown by Scotsman Martin McGavock and his course management team.     The short par-four 2nd hole has no less than 23 bunkers, and the par five 3rd (the first of Dreamland’s 14 water holes) invites you to edge carefully around one of the resort’s many lakes.     The 4th offers your first par three: it’s a beauty with the green tight beside a lake, guarded by a cluster of bunkers. A picturesque on-course café sits nearby with ice-cold refreshments and hot snacks waiting to fortify you for the bigger challenges ahead.     Hole six is an invitingly short par five, with a testing approach shot over a links-like grassy hill. When the pin is set back-right, you have a blind pitch towards water which is not good for the nerves. Bravery is the essential 15th club when you’re playing golf here.     After more water on the 7th and 8th, the front nine ends with an epic long par four which dog-legs around a lake to your left. An enormous bunker travels half the length of the fairway and the large multi-tiered green, like most at Dreamland, is lightning-fast. On the back nine you play closer to Dreamland’s real estate, although you do not feel crowded by the properties.     The 11th, regarded by many as Dreamland’s signature hole, is a flat-out stunning lakeside par three, the classic ‘water hole’, just 144yds (132m) from the White tees. A signature Cynthia Dye bunker sprawls almost the full length of the hole, stopping just short of a green which clings onto the side of the lake, guarded by bunkers either side. Viewed either from the tee or while looking back from the grassy mound behind the green, it is one of the most picturesque golf holes in Eastern Europe.     After the signature hole, you then tackle Dreamland’s signature lake. The 12th is a short par five, playing towards the resort’s impressive clubhouse and adjacent shopping mall, alongside a lake filled with fountains. At night they can be programmed to perform a spectacular water and light show.        Colin Montgomerie formally opened Dreamland Golf Club by striking the first tee shot in front of Azerbaijan’s President Ilham Aliyev on the 13th hole, which heads gently uphill back towards the golf course interior. The 15th is a particularly memorable short par four, with water from tee to green on the left, and the challenging par five 16th marks the start of a strong finish to the course.     The 17th is probably Dreamland’s toughest par three. It tends to play into the prevailing wind and can be a fairway wood to a lakeside green, guarded by a huge, snaking bunker to the left.     The dramatic final hole tempts your tee shot with a generous, undulating fairway, guarded again by water on the right all the way. Your final approach shot is played up to a large clover leaf-shaped green with dramatic contours, sitting right on the edge of the water.

AND RELAX.  From there it’s a short walk to the Academy and refreshments at one of Dreamland’s well-stocked bars. Here you’ll find Michael Sweenie, the club’s Head Professional, and his experienced IMG Academy staff waiting to help you work on your game. There’s also a cluster of golf carts waiting to whisk you anywhere on the resort.     To add further golfing variety to your stay, Dreamland can also organise a Stay & Play trip to the impressive and highly luxurious Rixos Quba hotel in the Caucasus Mountains, which is adjacent to the National Azerbaijan Golf Club. The 24-hour trip gives you 18 holes of golf, a night in the Quba hotel, and a drive into the mountains as a refreshing change of scenery.     It’s best to book directly through Dreamland Golf Club. They can organise your accommodation, excursions, your golfequipment and even your golf shoes, should you wish to travel light.    Azerbaijan is definitely still earning its spurs as a global golf destination, but when the golf course and facilities are as good as they are at Dreamland Golf Club, and with a city as memorable as Baku as your base, you will find that a week at Dreamland will simply fly by – and you’ll have a genuinely exotic, one-off golf experience to boast about to your friends at home afterwards.

To book your Dreamlands Holiday go to GREATGOLFHOLIDAY.COM